Dragonflies use their wings in a variety of ways, and for a variety of purposes.  The most obvious, of course, is as a means of locomotion.  Even in flight, however, the wings can operate in a number of different ways – sometimes with the forewings and hindwings flapping in unison, and sometimes with them flapping out of phase.

Dragonflies also spend a considerable fraction of their flight time gliding and soaring.  Sometimes they even “sky dive,” which is accomplished by holding their wings high above their body and dropping briefly in free fall (Walker, 2013a).  Wings, it seems, are as flexible in their various modalities as they are in their constitution.

Other interesting uses for wings have also been observed.  For example, “wing grabbing” is a behavior exhibited by some males as they attach in tandem with a female (Walker, 2013b).  In addition, “spin-drying” at 1,000 rpm is a fascinating behavior that is done to dry off after a series of “splash-dunks” (Walker, 2011a, 2011b).

In this article, I report on another way that dragonflies use their wings, which I refer to as “wing whacking.”  So far, this behavior has been observed in Paddle-tailed Darners (Aeshna palmata) and White-faced Meadowhawks (Sympetrum obtrusum), but it seems likely that many other species will be found to display similar behavior.

The Basics of Wing Whacking
Wing whacking occurs when a pair of dragonflies are actively mating in the wheel position.  An example of a pair of Paddle-tailed Darners in the wheel position is shown in Figure 1.  The mating process can last for several minutes, and can involve a good deal of activity.  Sometimes the female appears to become a bit fidgety, and will start to move about.  When this happens the male lifts his abdomen upward a bit, and then “whacks” the female on either side of her head with his wings.  The result of the wing whacking is that the female settles down and mating continues. 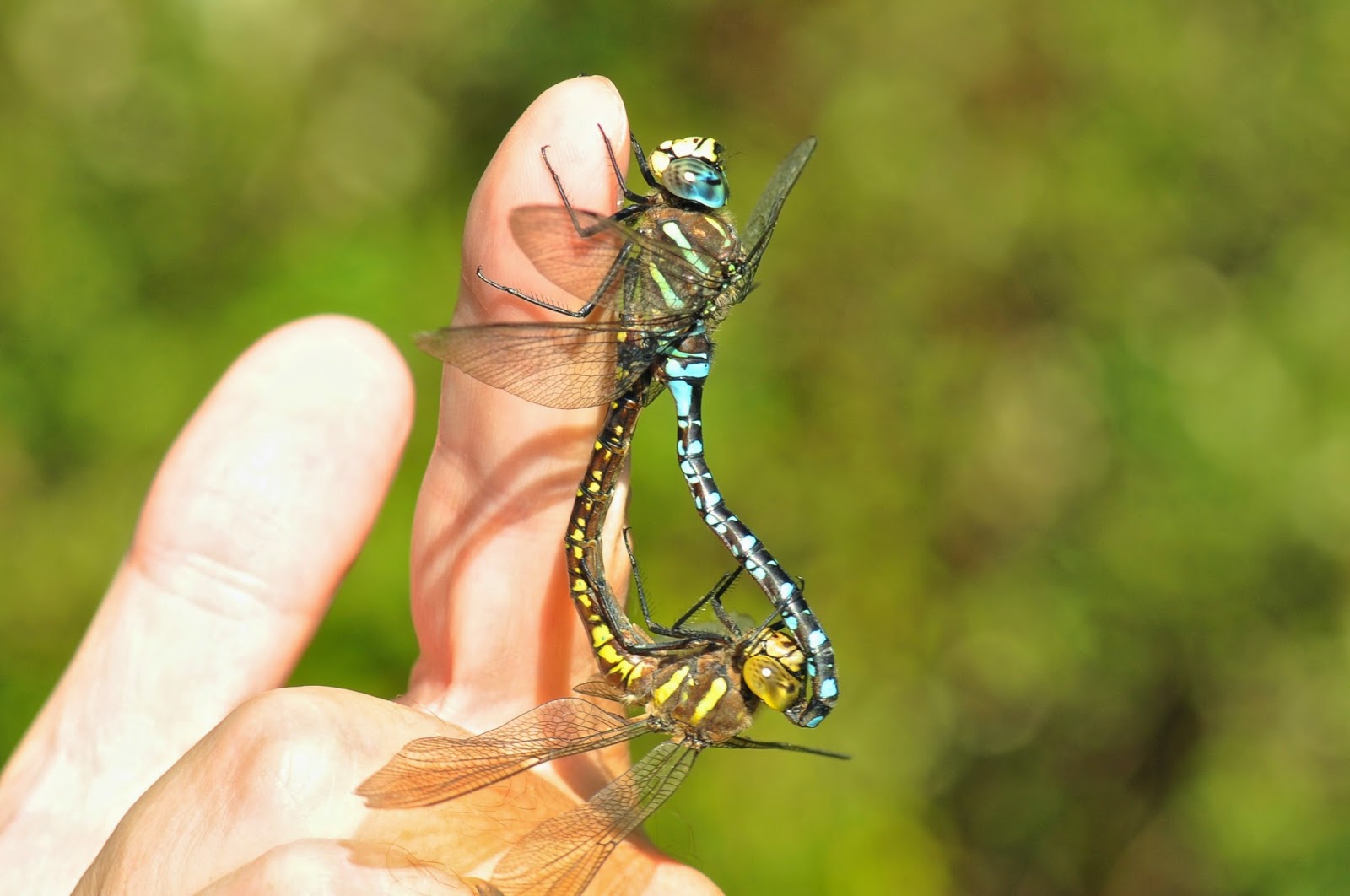 Figure 1  A pair of Paddle-tailed Darners mating in the wheel position.  If the female starts to fidget, the male will calm her down with a few well-placed wing whacks.

In a typical situation, the male whacks the female 3 to 4 times in rapid succession for about 0.15 s, as determined by counting frames in a slow-motion video shot at 240 frames per second.  The male then rests for about 0.18 s before resuming with a second burst of 3 or 4 whacks.  Two rounds of wing whacking are sufficient to restore calm in the cases I’ve observed so far.  Here's a video example: 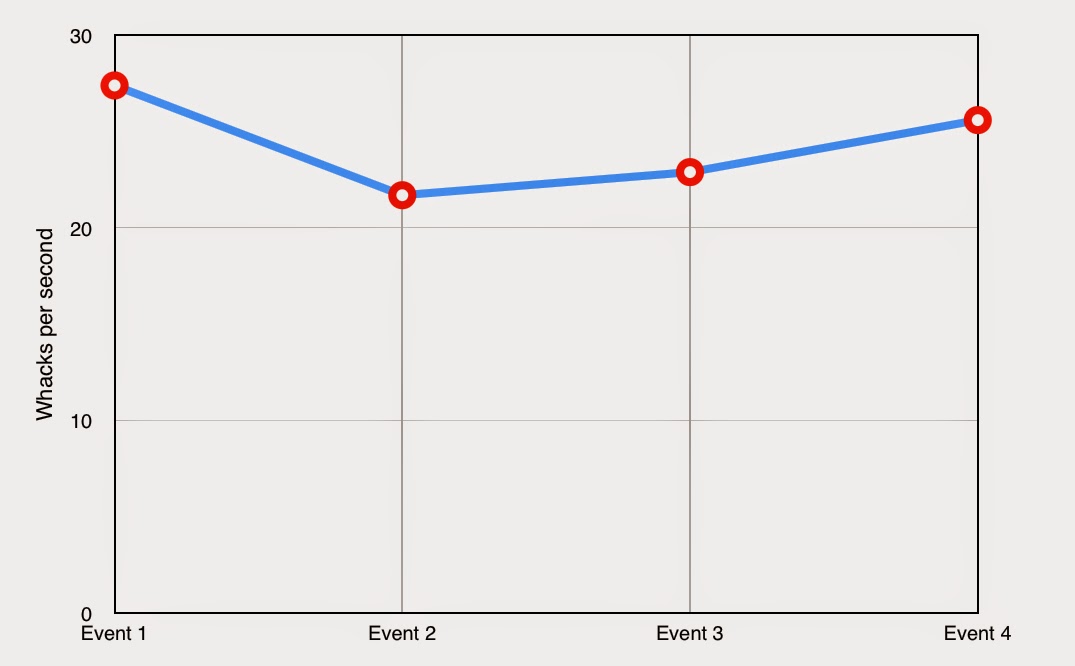 Figure 2 The frequency of wing whacking, in whacks per second, for four different events that were analyzed with slow-motion video.

The same basic wing-whacking behavior has been observed when a single male attempts to separate a mating pair.  In this case, the interloping male approaches the pair and attempts to land on the thorax of the mating male.  As it comes in for a landing, the male in the wheel position whacks the other male with its wings, just as it would do with a fidgety female.  In the cases I’ve observed, the wing whacking has been effective at repelling the unwanted advances.

Post-Whacking Quivering
An interesting and unexpected element of the wing-whacking behavior is observed after the female has settled down.  It would seem that once the goal of restoring calm has been achieved, the male would simply rest.  Instead, he “quivers” his hindwings – and the hindwings only – much like the shaking motion of a Quaking Aspen leaf.  Here's an example:

The quivering motion of the male’s hindwings is observed to last for about 0.25 s to 0.50 s, and is fairly rapid, clocking in at about 55 vibrations per second.  The purpose of the quivering is unclear.  Perhaps it serves as a signal to the female that the male is prepared to resume wing whacking if necessary.

Questions for Future Research
Wing whacking joins the ranks of interesting wing behaviors displayed by dragonflies.  It will be interesting to see what other species show a similar behavior, and how many species use a similar whacking motion to repel unwanted males.

Finally, it should be noted that to the human eye it appears the female fidgets, and that the male reacts and calms her down, as described above.  Another possibility, however, is that the male is actually the one who is fidgeting as he conducts the important business of mating and sperm transfer.  Perhaps the wing-whacking is simply a manifestation of the male trying to retain control of the female during active mating.  Additional observations should shed more light on these questions.

I would like to thank Betsy Walker for help with these observations.

Quivering motion of the hindwing of a male Paddle-tailed Darner:
https://www.youtube.com/watch?v=eHhq-BhD4vM&list=UUMwHl_FOla84YxH7rt66CzQ
Posted by  James Walker at 9:40 AM No comments:

Happy Valentine's Day from the Dragonfly Whisperer and the Happy-face Dragonfly: 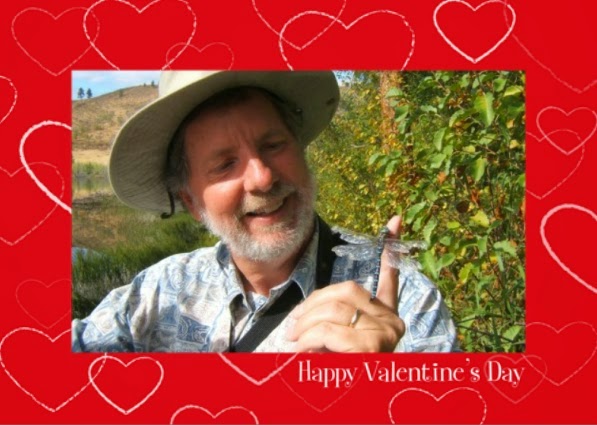 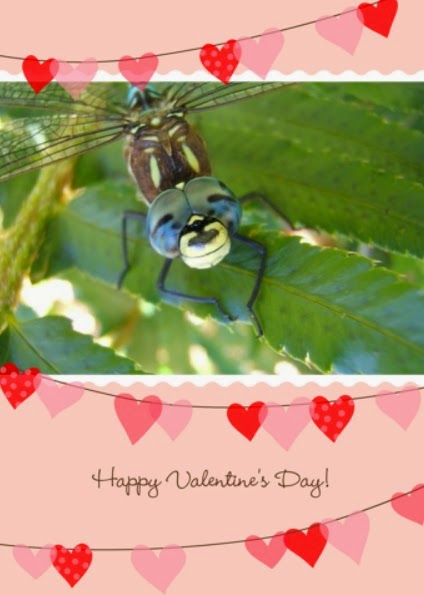 In addition, Happy Valentine's Day wishes from the Calico Pennant, which has a series of heart-shaped spots on its abdomen.  Here it is: 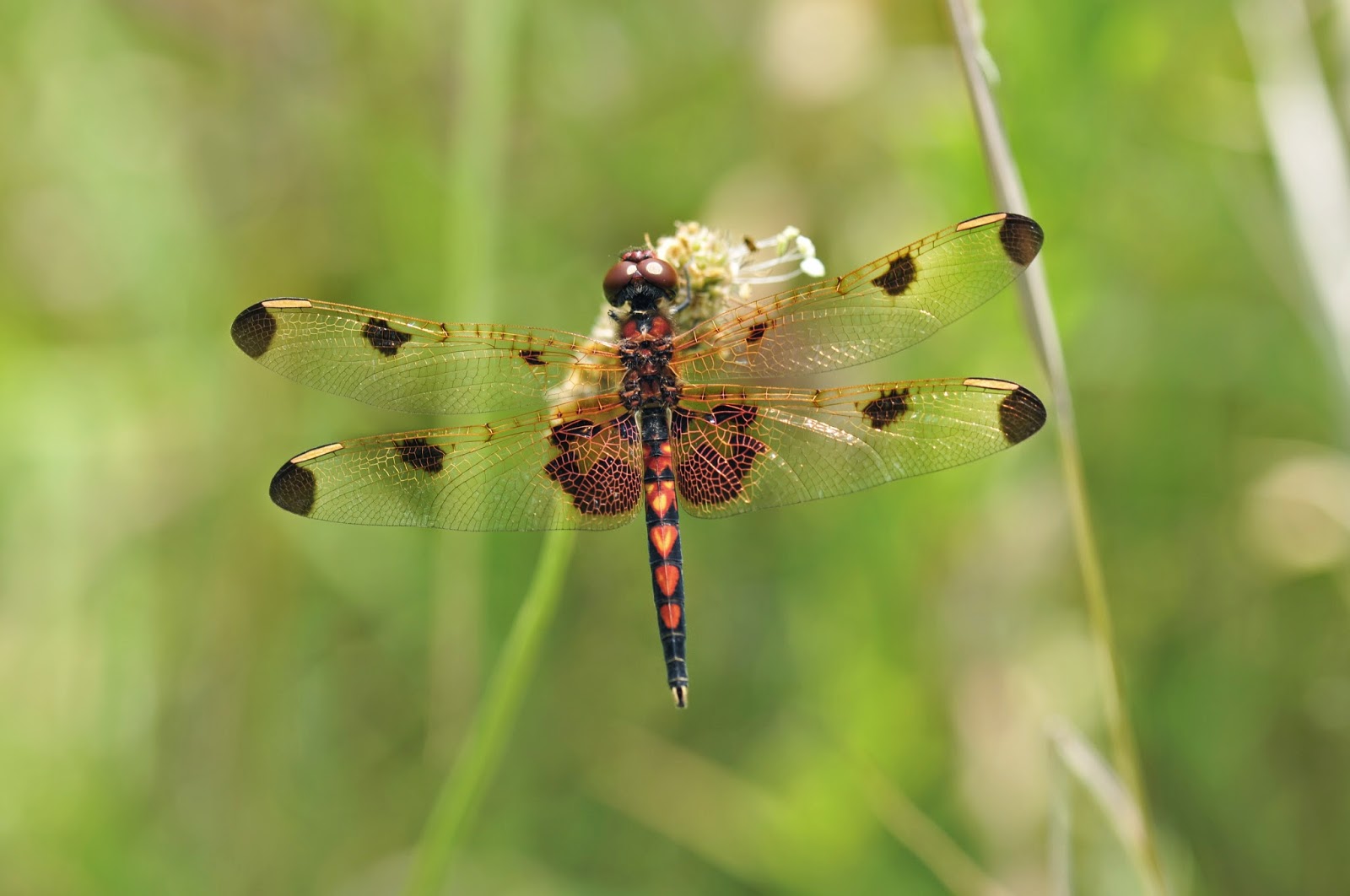 A beautiful dragonfly, and very much in the Valentine's Day spirit.  Perhaps it's name should be changed to the Valentine's Pennant.
Posted by  James Walker at 5:40 PM No comments:

I'll be giving a dragonfly talk tomorrow at the Sound Waters conference.  Here's their logo:

Some information on the talk and speaker are given below: 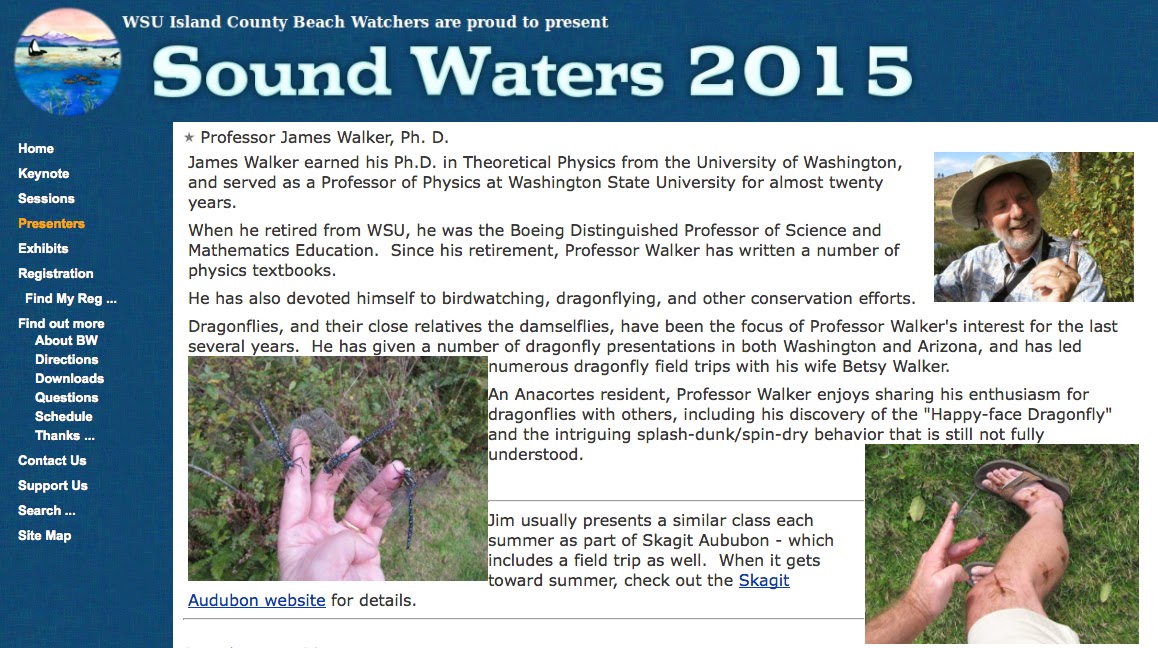 I'll be giving all those in attendance the following handout.  You can print the version below to get a nice color copy: 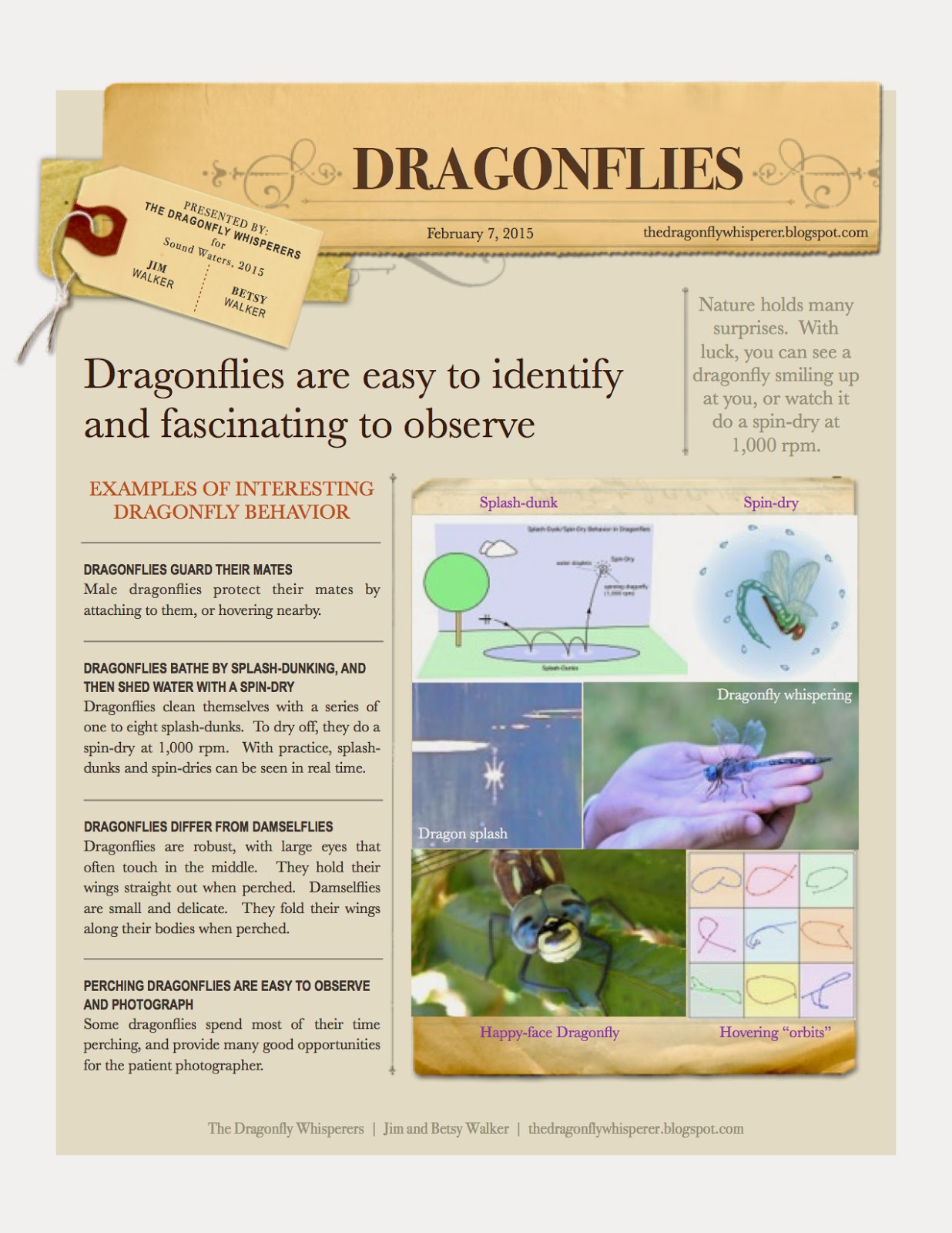 I hope to see you there tomorrow.

I'll sign off with a Vitruvian Dragonfly advertising the event: 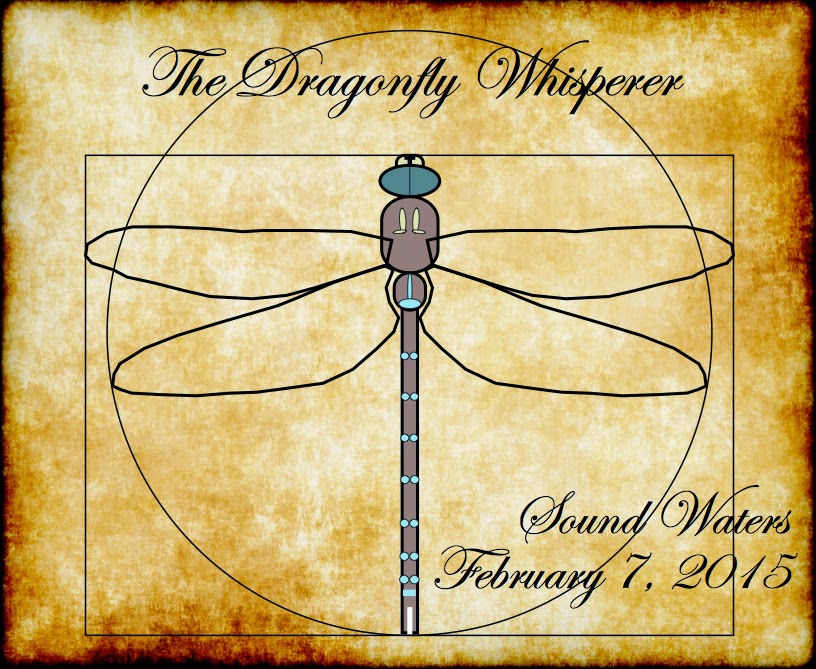 Posted by  James Walker at 5:00 PM No comments: