The next species in our spotlight is the Western Pondhawk—a common dragonfly all up and down the Pacific coast. It's range extends eastward into Texas in the southern part of the USA.

Mature males of this species are a wonderful powder blue color—though they start off life a brilliant green. With age they turn blue from the tip of the abdomen forward. Females also start off green, but they retain their green color for life, making them the only mature green dragonfly on the Pacific coast. 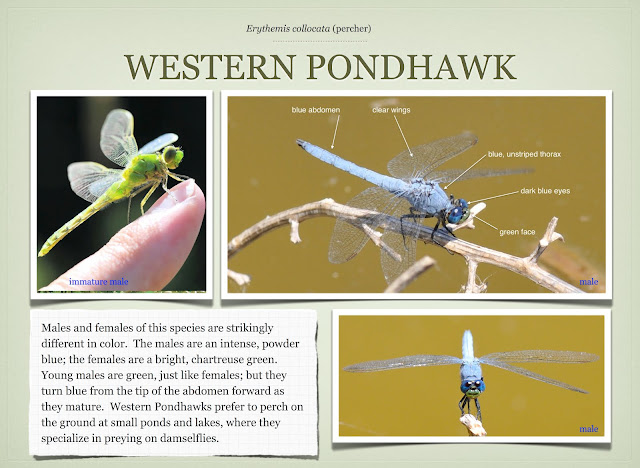 This dragonfly loves to perch on the ground—which it almost always does unless the ground is covered with vegetation. It also seems to specialize in eating damselflies; at least, when I see them eating prey, it's usually a damselfly. 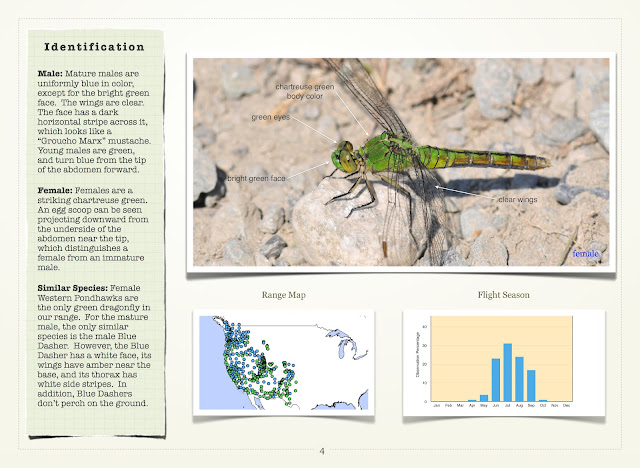 Also, be sure to look for the "Groucho Marx" mustache on the face of this species. It's quite distinctive, and is often seen on females as well!

For more information, see Common Dragonflies and Damselflies of the Pacific Coast:

Note: Over the years, this post from September 4, 2013 has been one of the most popular on the blog. I thought I would re-post it so more people will have a chance to see what it's all about. I still hope to get to Cherry Springs Nature Area one of these days.

Not long ago, I was contacted by naturalist Sheri Covert at the Cherry Springs nature area near Pocatello, Idaho.  She was putting together an interpretive sign to inform visitors about some of the interesting insect life to be found there, and asked if she could use a couple of my dragonfly pictures.  I was happy to help with a project like that, and supplied her with pictures of the species she was looking for.  Here's a rough draft of the sign, which looks very nice. 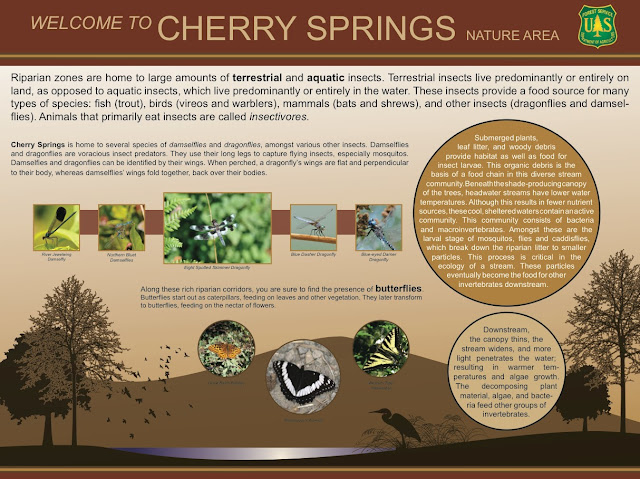 Here's an enlargement of the dragonfly section:

I look forward to visiting Cherry Springs one of these days.  If any of my intrepid readers gets there first, please take a picture of the sign in place and we'll include it in the blog.

You can learn more about the species featured on the Cherry Springs Interpretive Sign in my new field guide, Common Dragonflies and Damselflies of the Pacific Coast. You can see more about it at the following link to Amazon:

P. S. They have a very good price for it right now!
Posted by  James Walker at 8:02 AM No comments:

The previous post, on the Columbia Clubtail, brought to mind an enigmatic set of structures of male dragonflies referred to as the auricles. The reason for the name is that the shape of auricles in some species is vaguely ear shaped. The function of the auricles is unknown at the moment, though the best guess is that they may assist the female as she tries to find the hookup point for mating. 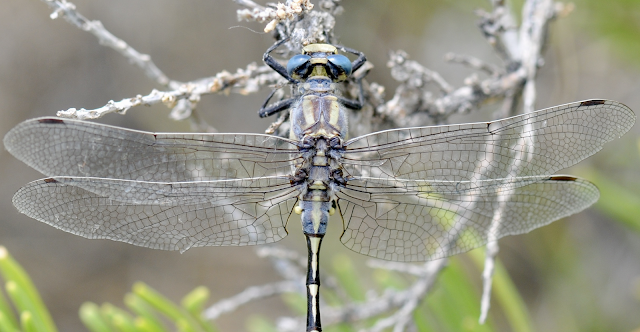 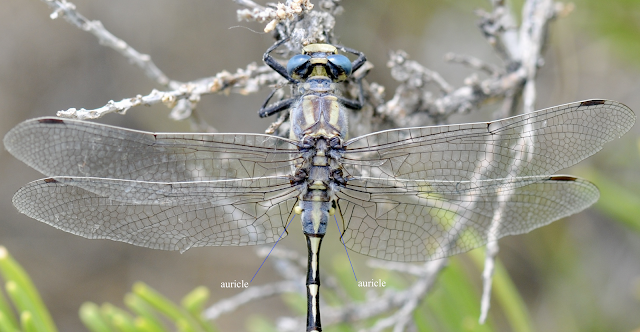 The auricles in this species are bright yellow, contrasting with the pruinose blue abdomen, and shaped like little tennis balls.

Here's another clubtail species, the Pacific Clubtail, which also has prominent yellow auricles. 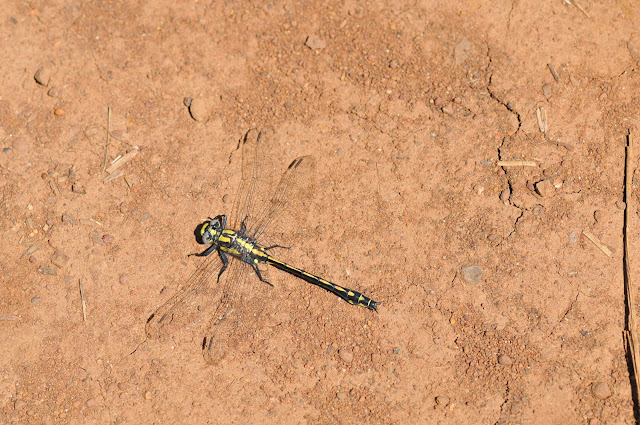 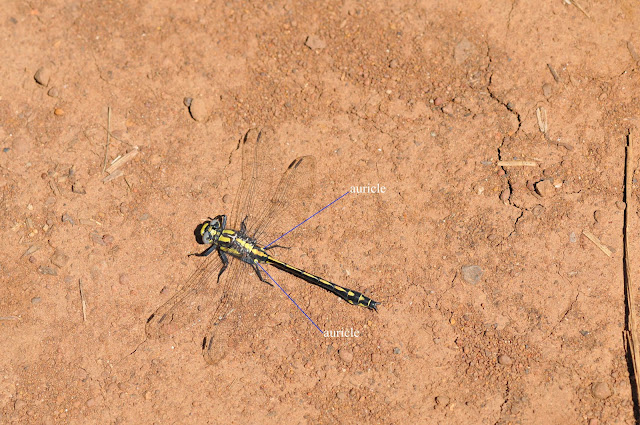 Closely related to the clubtails is the Grappletail—also with prominent yellow auricles: 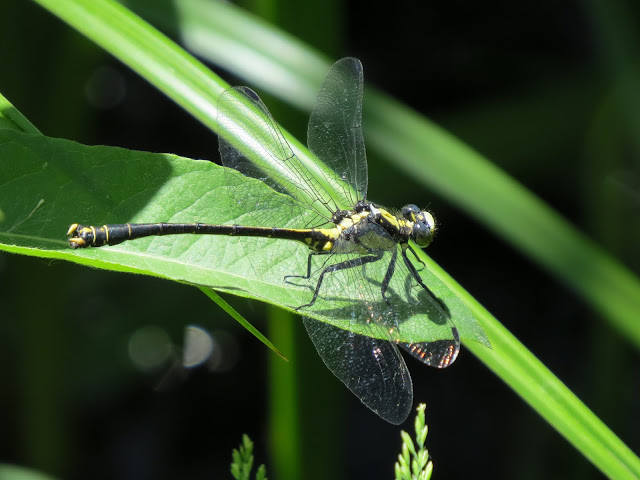 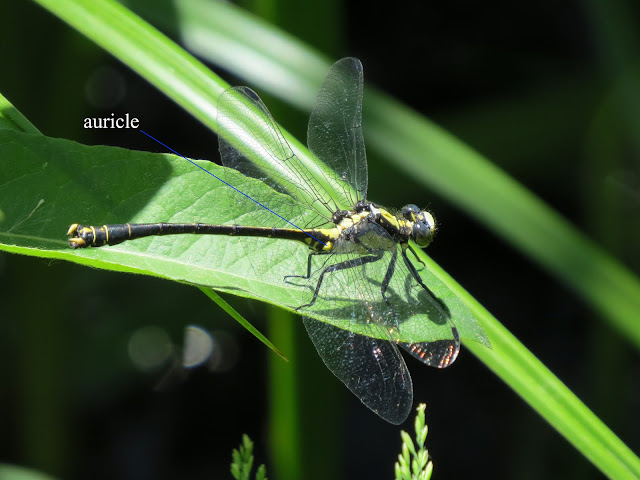 In darners, the auricles are more ear shaped, and not quite as prominent—though they do have a nice blue color. Here's an example in the Shadow Darner: 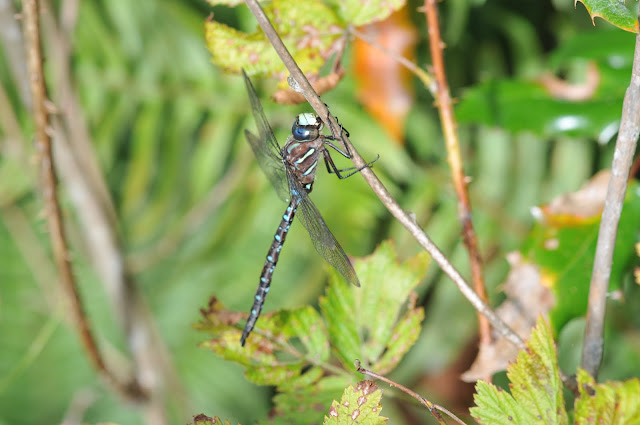 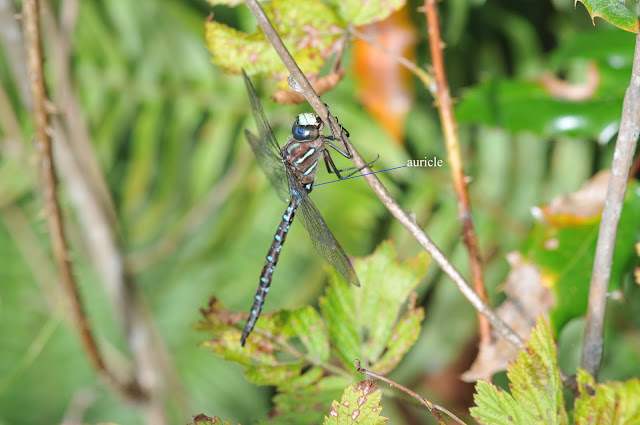 Here's another view, this time in a Paddle-tailed Darner: 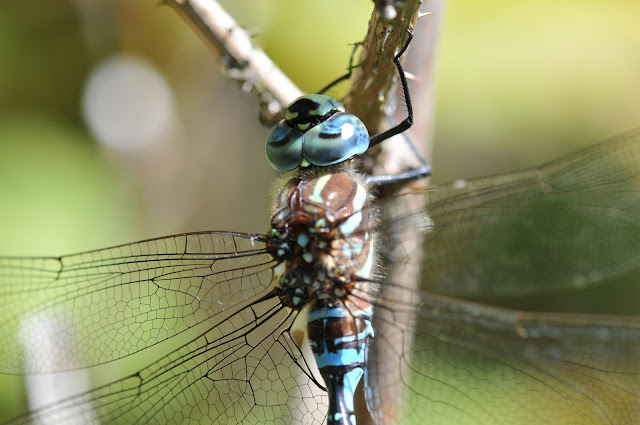 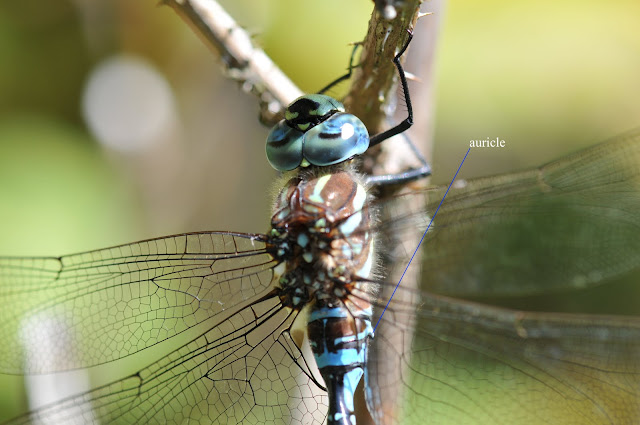 Next is a view of the underside of dead Paddle-tailed Darner we found at Cranberry Lake. 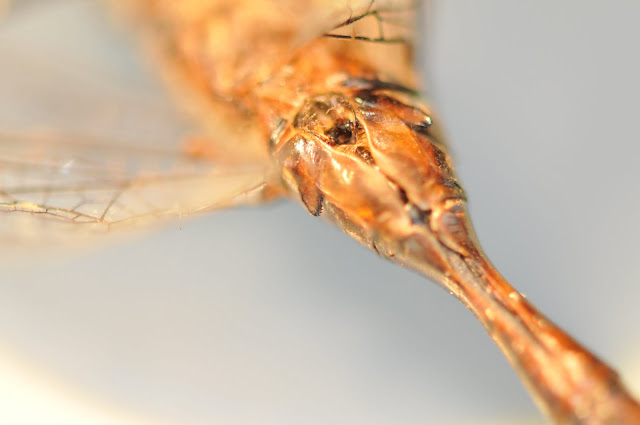 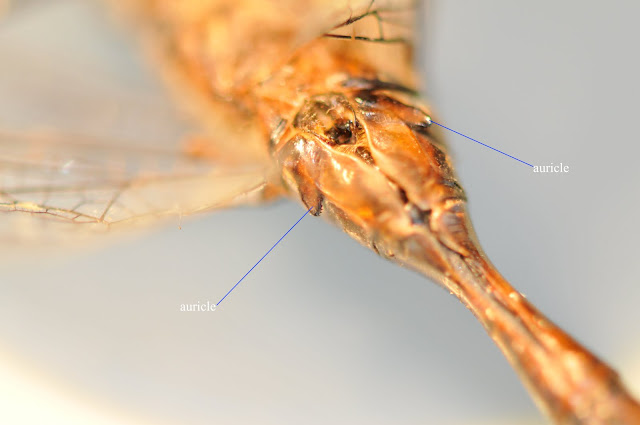 Notice the little "hooks" along the edge of the auricles. What is their purpose?

In contrast, here is a similar view of a female darner, showing the lack of auricles: 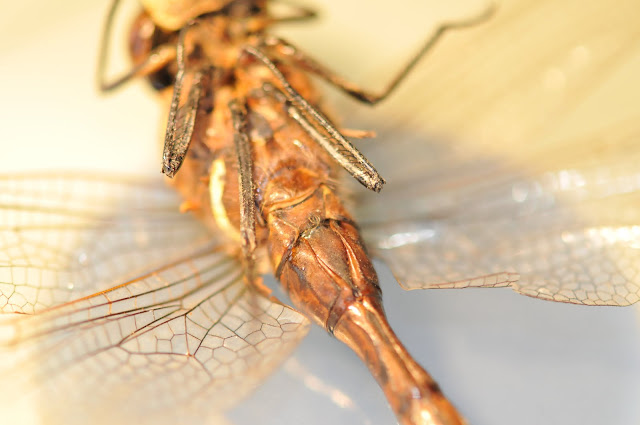 All in all, the auricles are a mysterious feature of male dragonflies. Maybe one of these days we'll get to see these structures in action—that would be fun.
Posted by  James Walker at 10:16 AM No comments:

The Columbia Clubtail is one of the most interesting dragonfly species in our range—in a number of different respects. First, it was discovered in 1971 on the Yakima River in arid south-central Washington state, and was named by Dennis Paulson in 1983. This makes it the most recently described dragonfly in our range.

Speaking of range, the distribution map for this species is quite strange. In addition to the initial sightings near the Columbia River, in Washington and Oregon, there is also a single sighting on record in both Nevada and New Mexico. Are these remnants of a larger range in the past? Any additional sighting of this species will be of great interest to the dragonfly community. 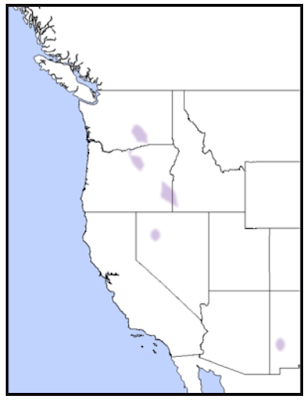 The Columbia Clubtail is a bold, dramatic-looking dragonfly that is easy to approach, and can be quite abundant in the isolated locations where it occurs. Individuals of both sexes generally perch on the ground, or low in a bush.

Here's a look at the male Columbia Clubtail: 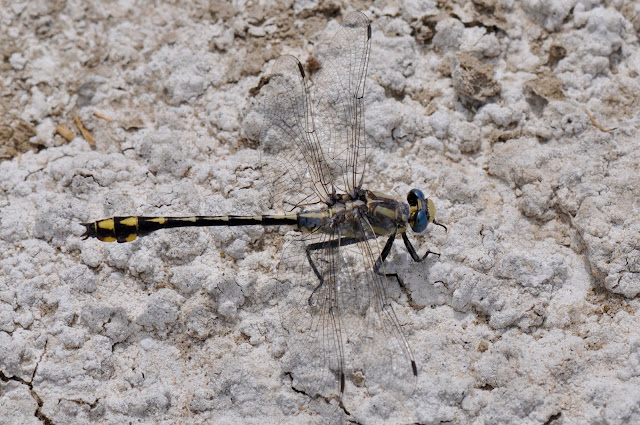 Notice the beautiful blue eyes, and the yellow face. Here's a different view giving a better look at the "club" and the appendages: 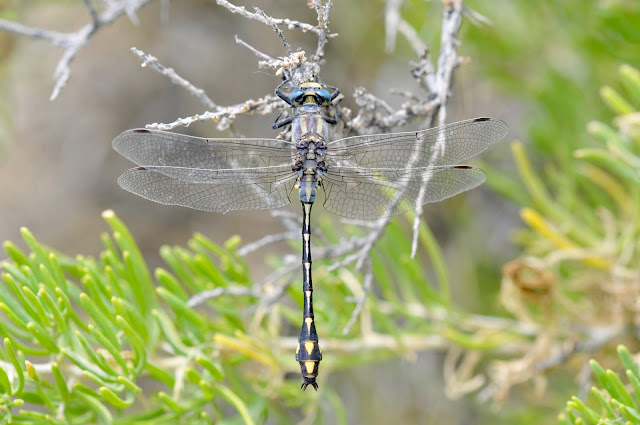 Females are quite similar to males in most respects, but they have a smaller "club" at the tip of the abdomen, and much smaller appendages. In addition, their abdomens are stockier near the base. Here's a look at one: 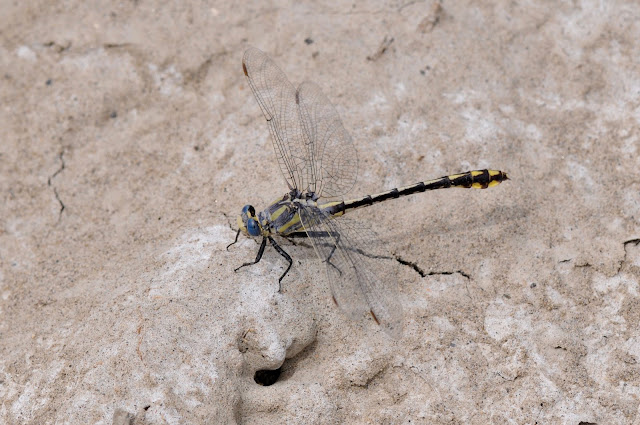 Keep a lookout for this species. Will its distribution and behavior yield further surprises?

For more details see Common Dragonflies and Damselflies of the Pacific Coast, available at the following link:

We turn our attention now to a small, delicate damselfly—the Citrine Forktail. As one might expect from the name, males of this damselfly are a light yellowish color. Here's a male perched in deep grass, a typical habitat: 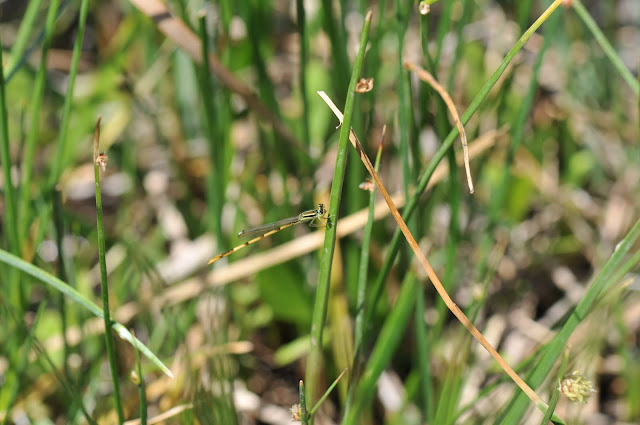 In addition to its distinctive color, this species is known for its short wings, as can be seen in the above photo.

Females, like those in some other forktail species, are mostly pruinose blue. Here's an example: 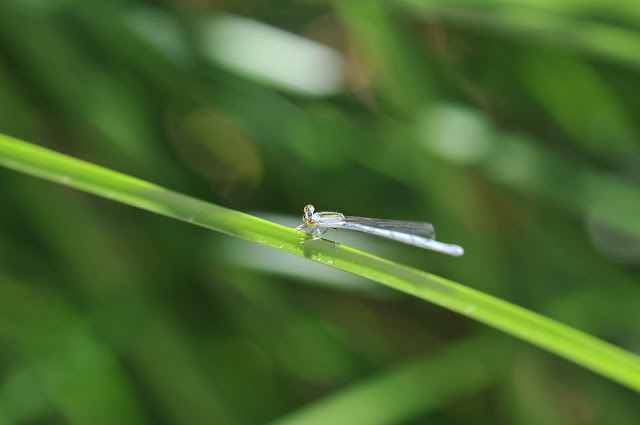 This species is generally quite inconspicuous. Individuals fly with a slow "floating" motion through high grass. They are often found as you walk through the grass, with the occasional step flushing a few. After drifting through the grass for a short time, they settle down again and disappear.

Here's a pair in the wheel position: 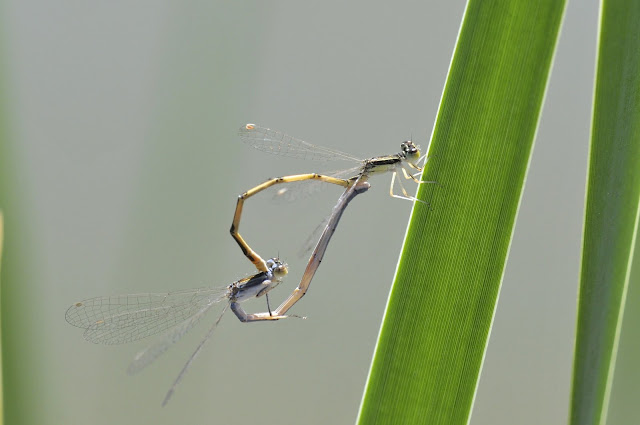 We see this species in Arizona, often along the shore of a small stream.
Posted by  James Walker at 9:40 AM No comments:

Well, the Dragonfly Whisperer speaks again! This time it is for Sound Waters 2018, a wonderful conservation conference sponsored by Sound Waters Stewards.

Here's some information on this year's conference: 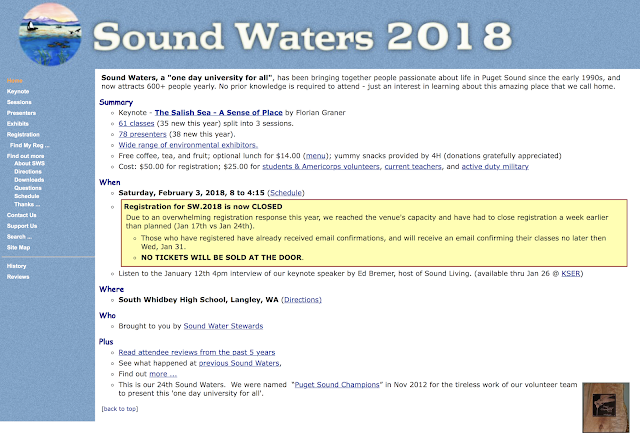 My talk is at 3:00 pm in the afternoon. Here's a short description:

I hope to see some of you there. Please stop by and say hello!
Posted by  James Walker at 4:32 PM No comments: