A large and widespread spreadwing damselfly.  The spots referred to in the common name are dark spots on the underside of the thorax, and are not generally seen.

This species is frequently seen flying in tandem as they go about the business of laying eggs.  Wings are held out at 45˚ to the body when perched.

Male: The key identifying feature for this species is the “staircase” pattern of light-colored, rectangular bars on the sides of the thorax.  In addition, the front of the thorax is dark.  The abdomen is dark over most of its length, but has a powder blue tip.  The eyes are an intense blue.

Female:  The female is overall brown in color, including the eyes, though she sports the same “staircase” pattern as the male on the sides of the thorax.  The abdomen is brown, with an enlarged tip where the ovipositor is housed. 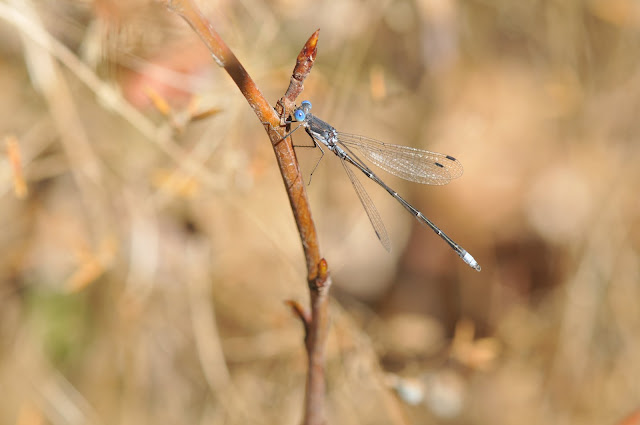 Habitat and Behavior:  Small ponds and ditches.  Eggs are laid in tandem, with the female probing the stem of a plant, then cutting a slit in it with her ovipositor, and finally depositing eggs in the slit.  In general, the eggs are laid on stems above dry ground, but in an area where the stems will be submerged later in the year.

The Spotted Spreadwing is widespread across North America.  Its flight season peaks in August and September. 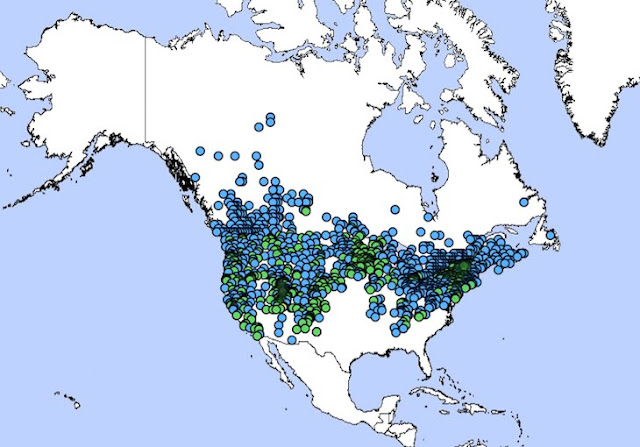 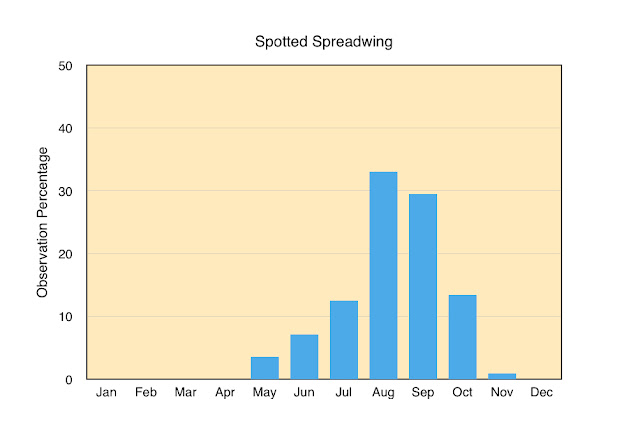 Posted by  James Walker at 2:19 PM No comments:

The Variable Darner is a large, mosaic darner with a number of distinctive features.  For one, its side stripes are of variable thickness, hence the common name of this species.  The side stripes sometimes even pinch off in the middle.  Similarly, the front stripes of the thorax are small or even absent.

Another distinctive feature is that the abdomen has cream-colored spots on the 10th segment.  In addition, the appendages are simple. 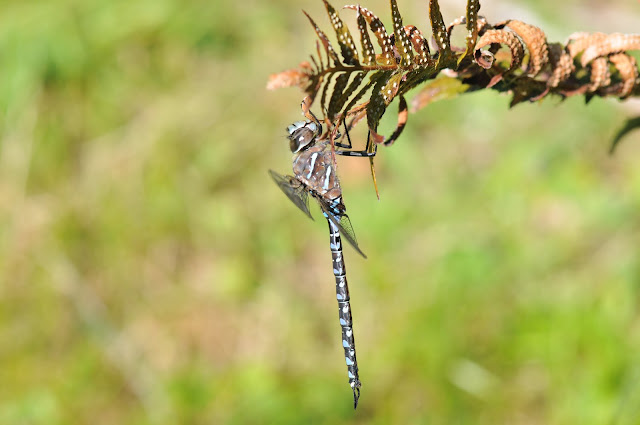 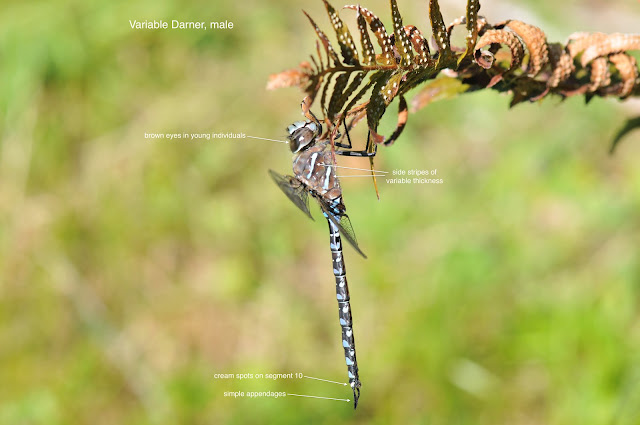 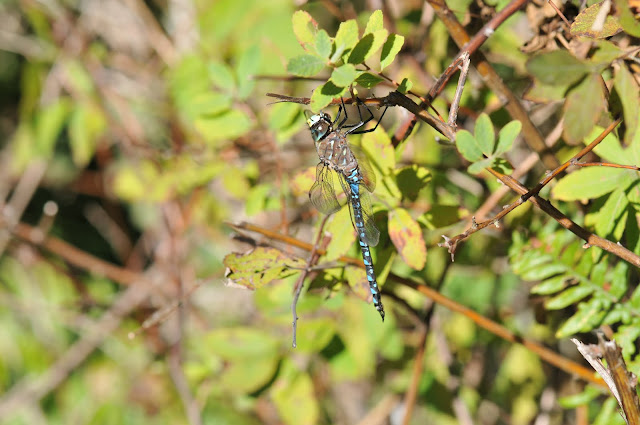 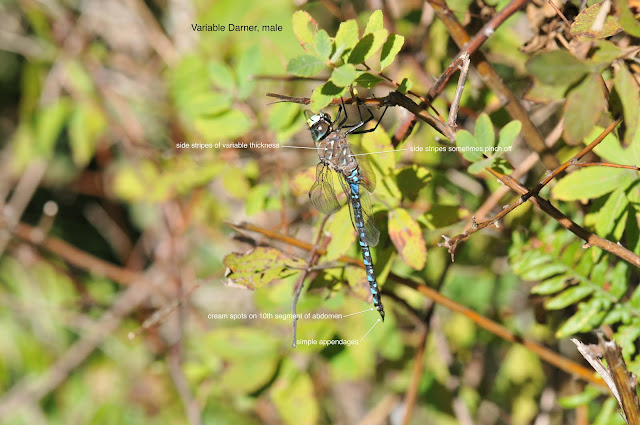 The Variable Darner is widespread at small ponds and lakes.  This species tends to perch low to the ground, often on human-made structures with a smooth vertical surface, like a signpost or a wall.  Females oviposit their eggs in logs and other vegetation along the shore. 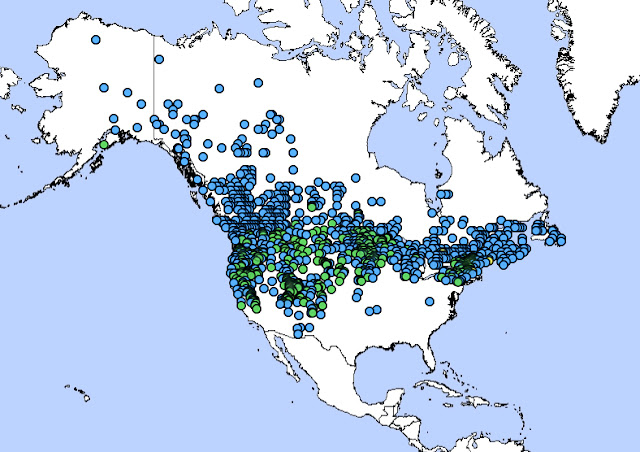 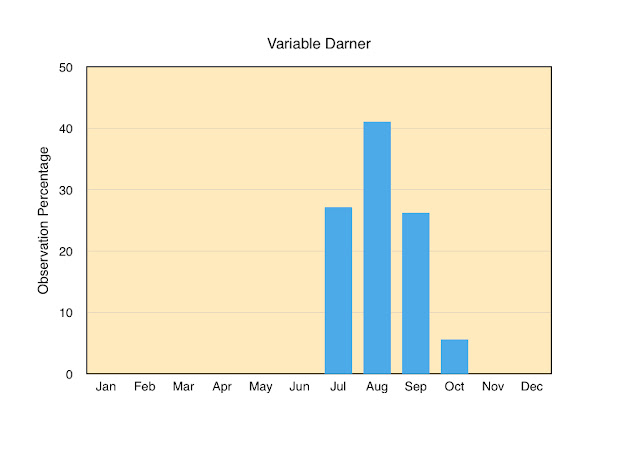 Posted by  James Walker at 2:03 PM No comments:

We've been binging on Curb Your Enthusiasm lately, and enjoying it quite a bit.  It's a fun series, and I like the fact that its shot in real locations, rather than in a sound stage, and that so many interesting people show up from time to time.

In the season 7 episode "Officer Krupke," referring to a character in West Side Story, Larry sits on a couch at the end of the episode.  I noticed that the pillows on the couch had representations of damselflies on them, which I thought was cool.  Here are a few pics of the scene, showing the interesting pillows: 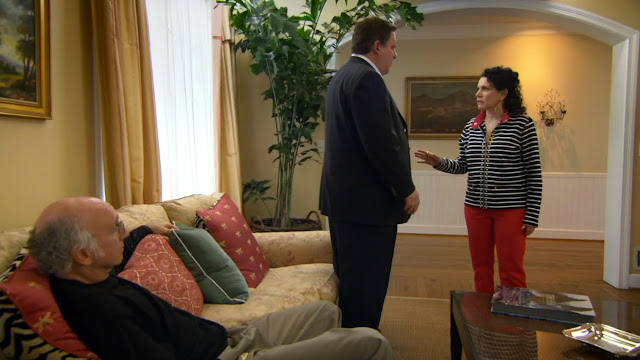 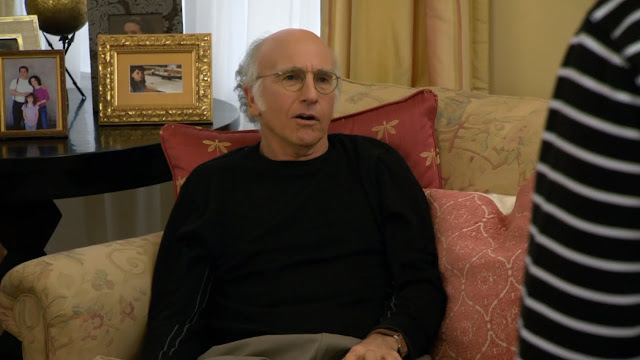 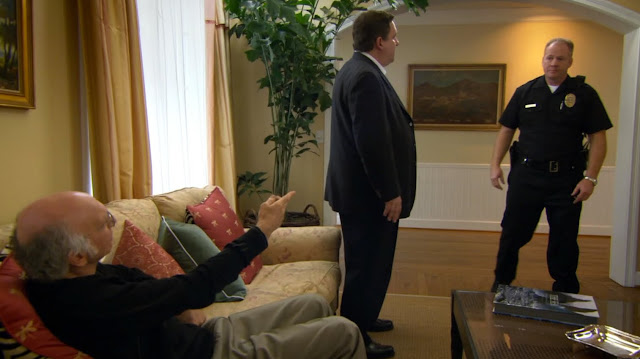 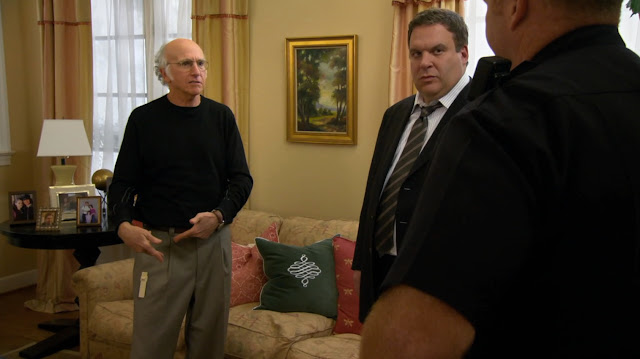 Posted by  James Walker at 1:26 PM No comments:

As with other bluets, the Tule Bluet is distinguished from forktails by having lots of blue in the abdomen.  This gives rise to the useful mnemonic:

lots of blue in it = bluet

The Tule Bluet is separated from other bluets by the almost equal-width bands of black and blue on the middle segments of the abdomen.  This is the key field mark for this species.  In many cases, Tule Bluets are numerous at a given location, even when no other bluets are seen.  Perched Tule Bluets fold their wings like a tent over the abdomen. 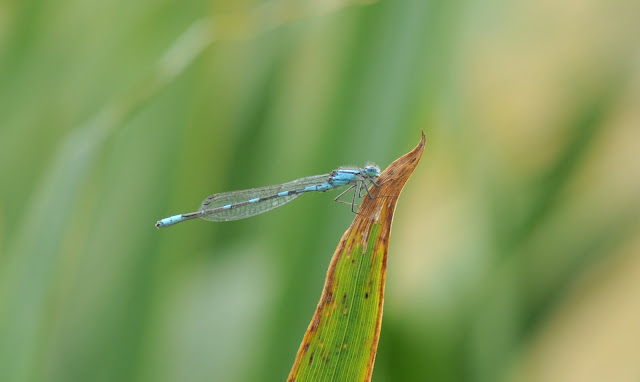 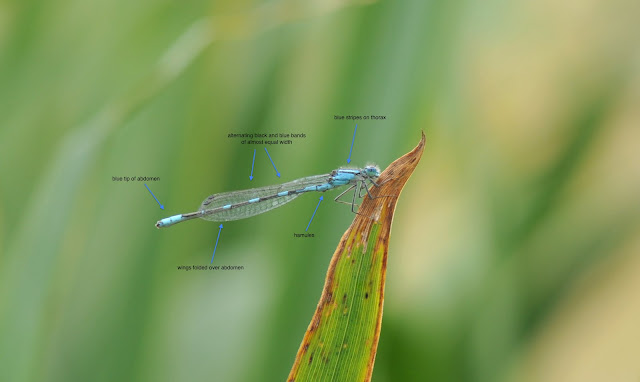 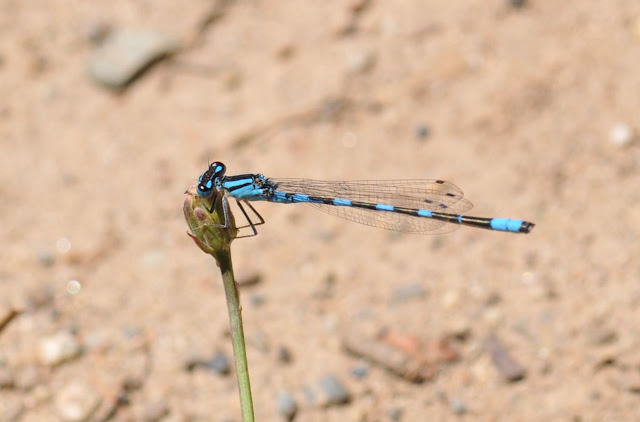 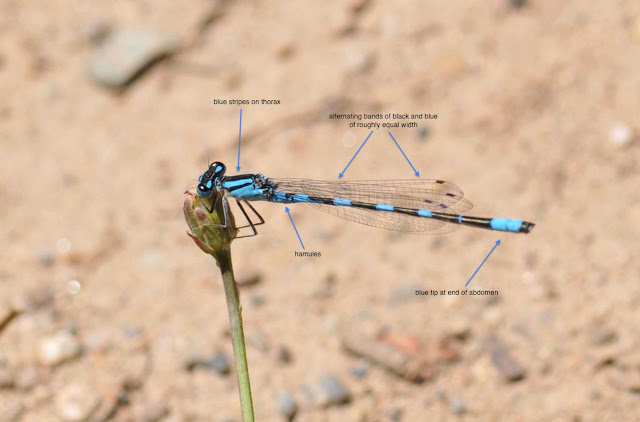 Tule Bluets are often numerous in the vegetation along the shore of a lake or pond.  They are frequently seen flying in tandem.  Females use their ovipositor to cut a slit in a stem of vegetation and deposit eggs inside.  Sometimes, the tandem pair lands on a stem emerging from the water, and descends on it until the female is completely submerged.  The male stays attached and goes underwater with the female in some cases, but more often releases his grip when partly submerged, and hovers until the female reemerges.

It is not uncommon to see a female in the bushes with the abdomen of a male still attached to her thorax.  This strange situation occurs as the result of an attack by a darner, who grabs a tandem pair and snips off the thorax of the male for a snack, dropping the rest into the bushes.  Here's an example: 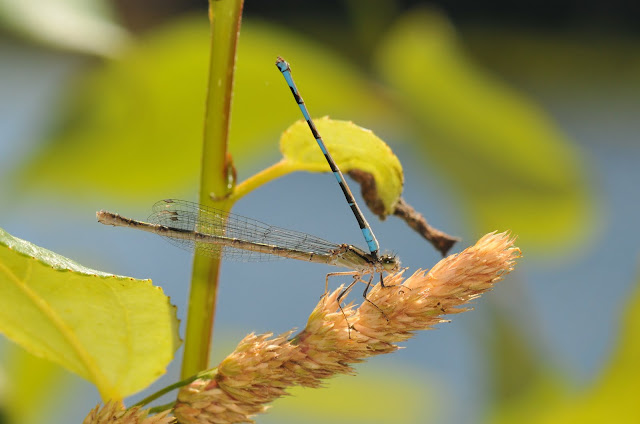 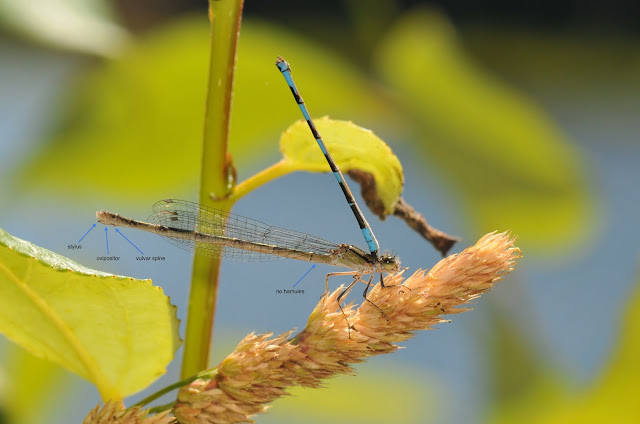 The Tule Bluet is widespread in North America, especially in the northern part.  Here's the range map: 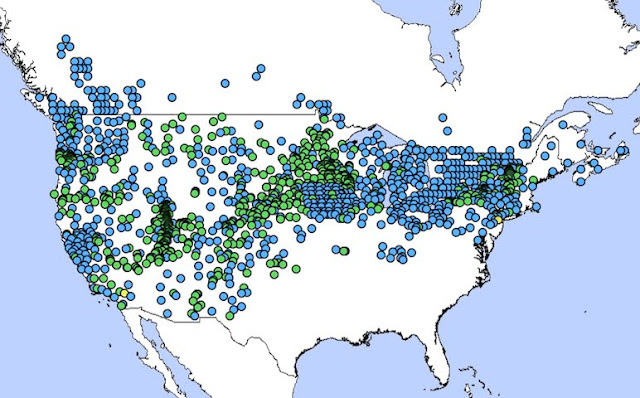 Posted by  James Walker at 1:45 PM No comments:

I ran across this wall decoration recently.  Nice representation of a swarm of dragonflies. 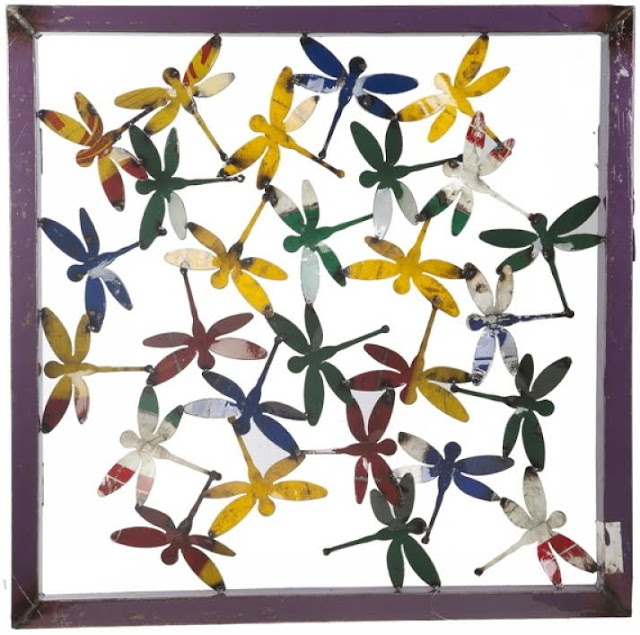 Posted by  James Walker at 9:23 AM No comments: 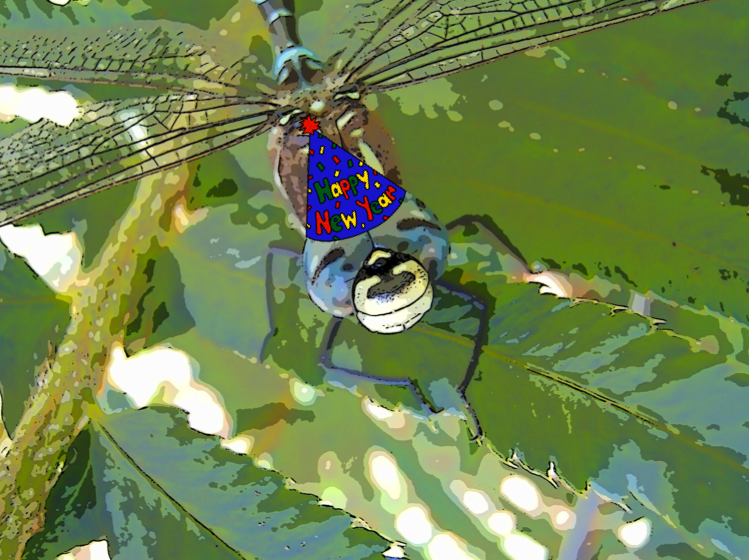 We've been enjoying Christmas here, as you can see: 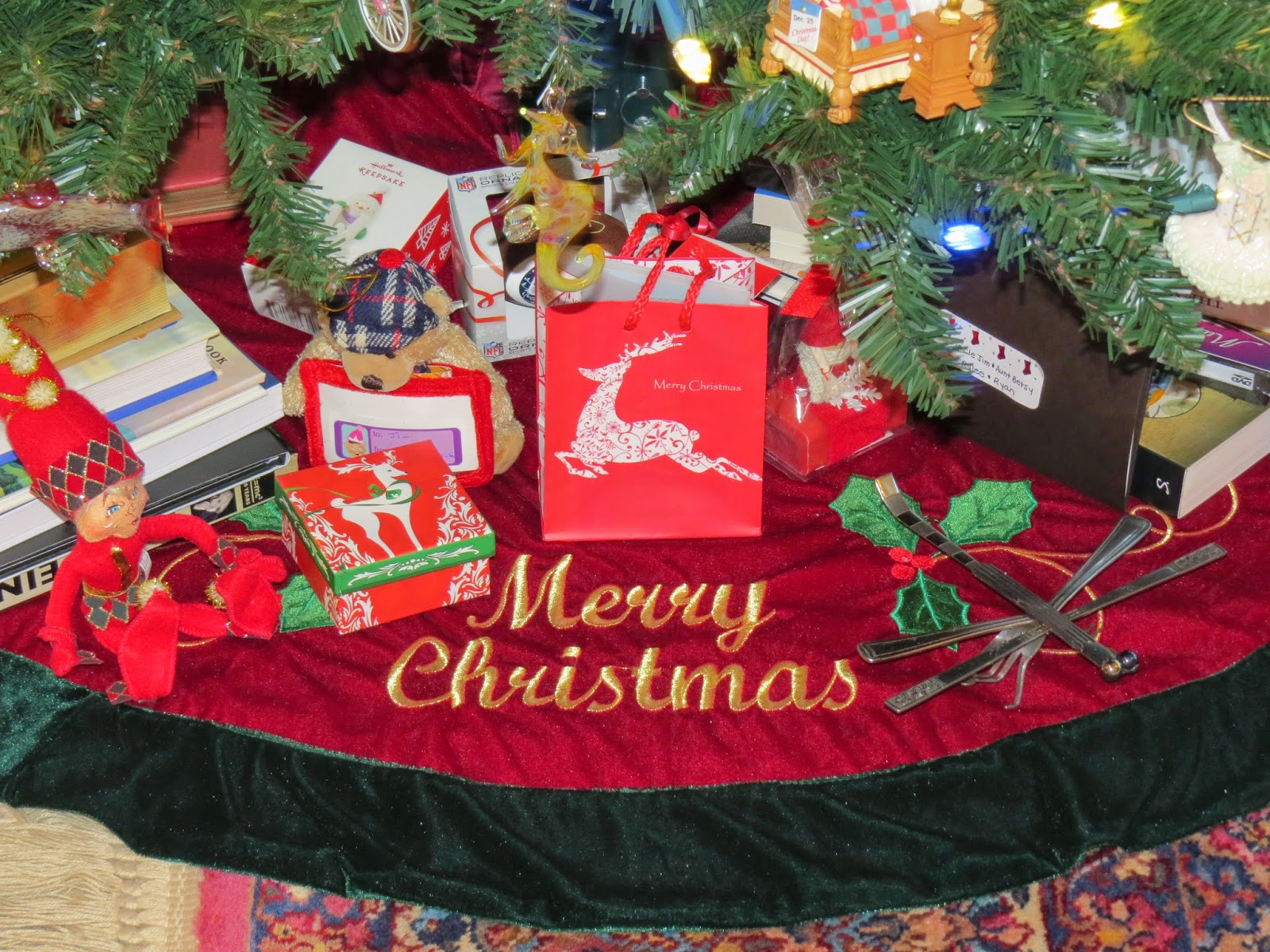 Now that the Christmas season is winding down, we've started off the New Year with a great day. 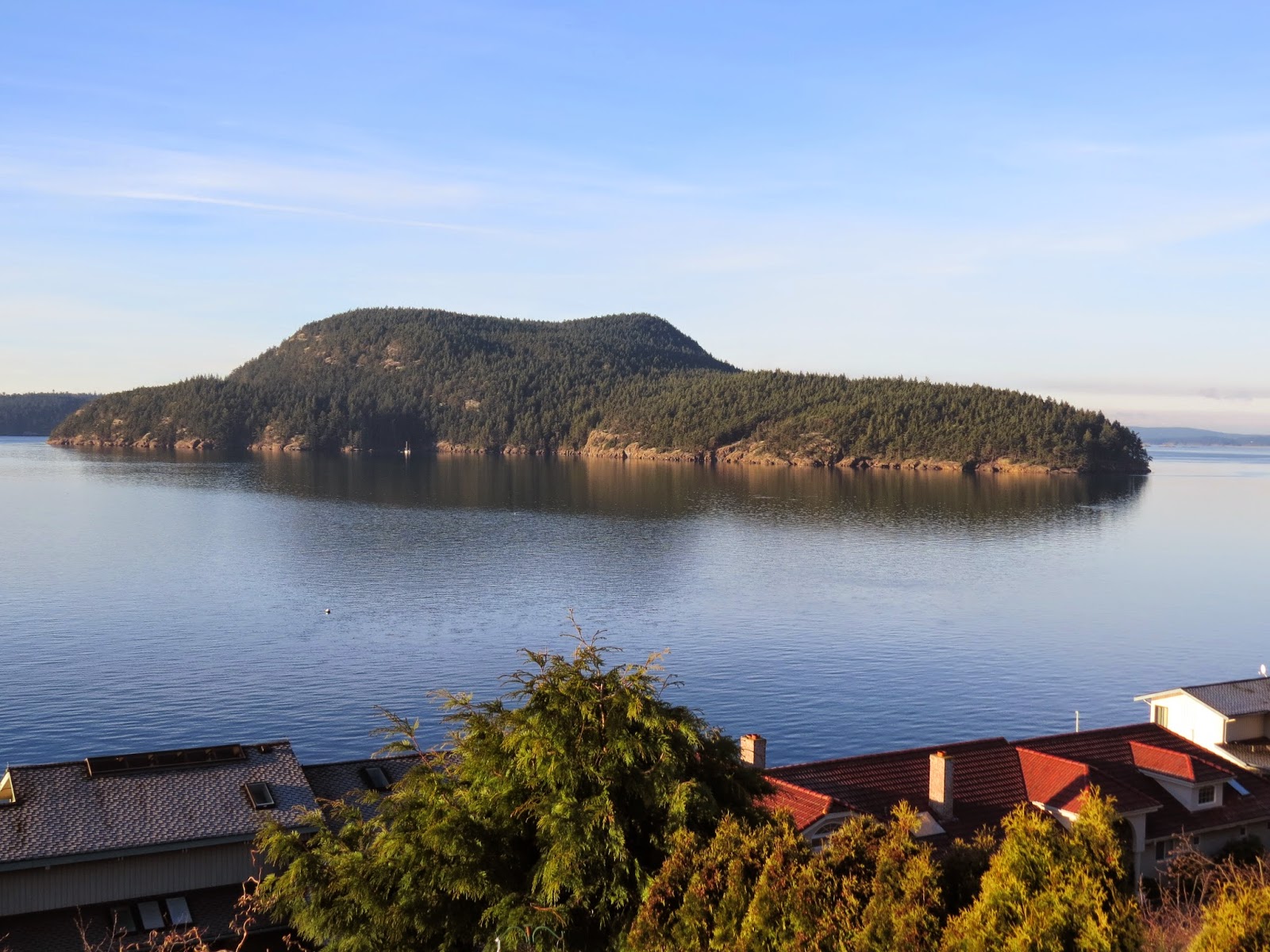 Happy New Year everyone!
Posted by  James Walker at 4:39 PM No comments: