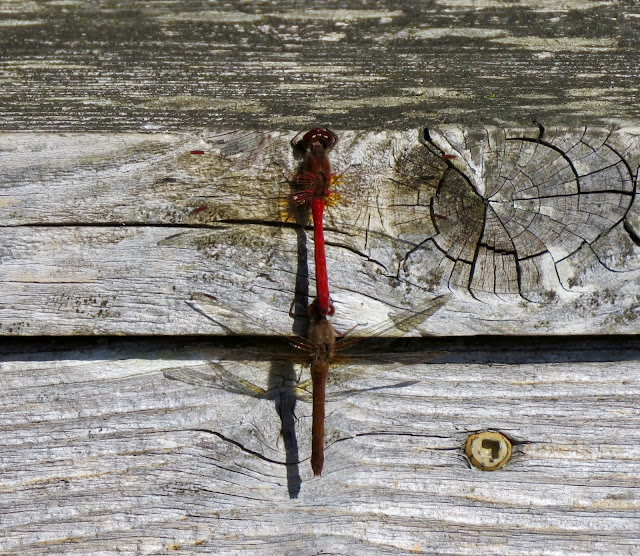 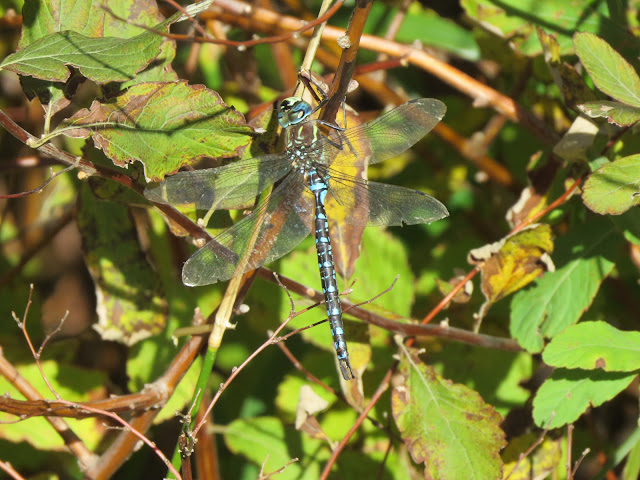 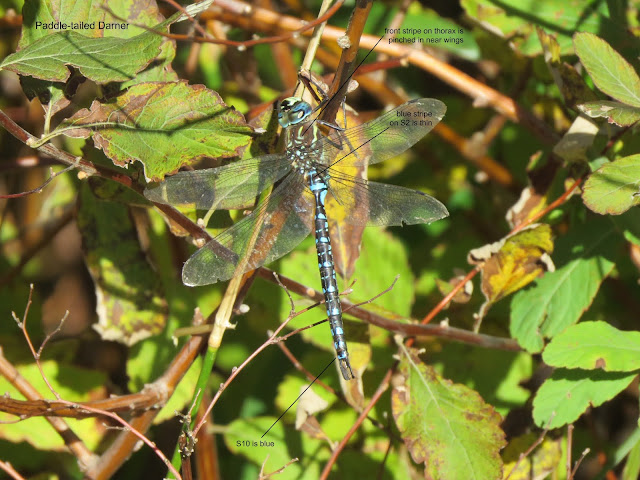 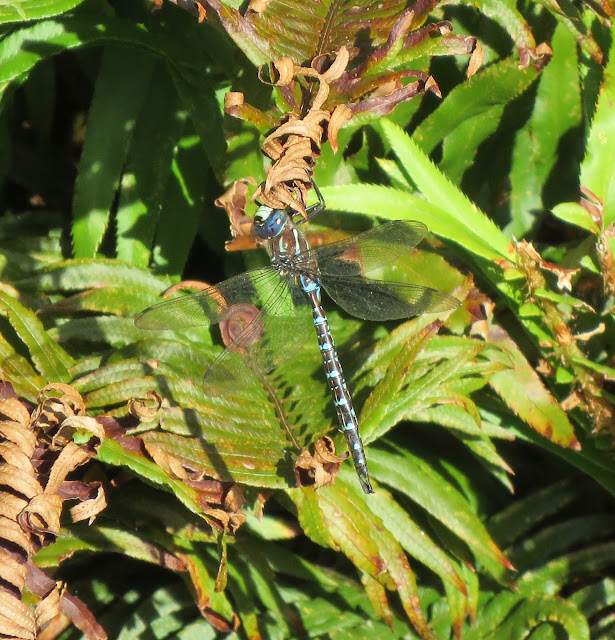 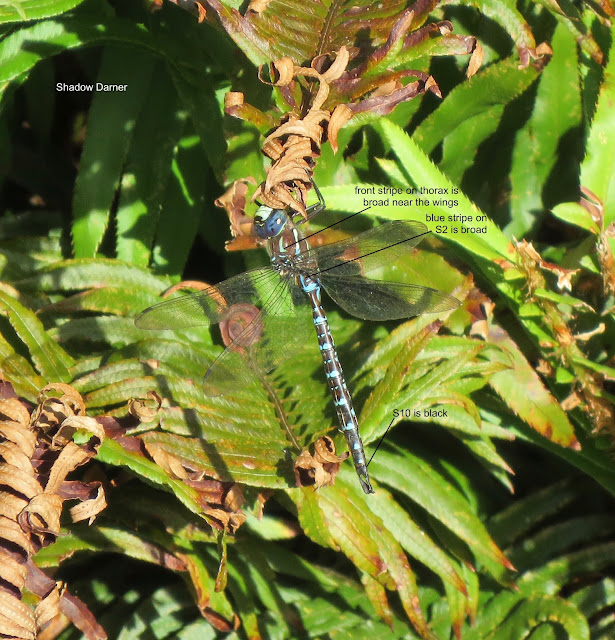 Yesterday, Betsy and I went to Little Cranberry Lake here in Anacortes to do a bit of dragonflying. There was a problem, however—before we even got to the parking area we saw cars parked along the road, and the lot itself was completely occupied. It was never this crowded during "normal times."

We decided, then, to try Smiley's Bottom near the high school, which we haven't visited for several weeks. I'm glad we did, because we encountered a surprising surfeit of odes there—and four of them were new for the year.

Here they are, in the order in which we encountered them.

The first was a darner patrolling near the ditches, which we immediately recognized, even from a distance, as a Paddle-tailed Darner. So nice to see the happy-face dragonfly once again. There were lots of them. We never saw one perch; they were hovering and patrolling their territories constantly.

Here are some shots of Paddle-tailed Darners hovering: 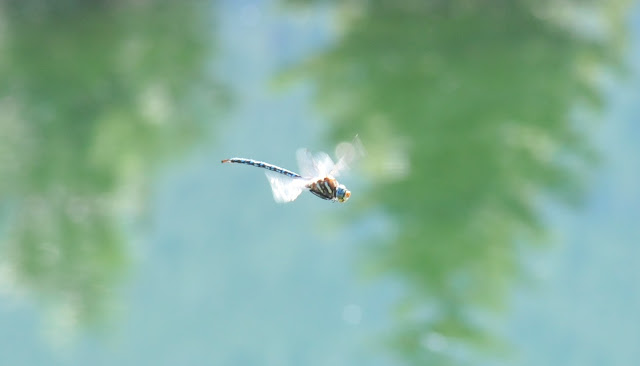 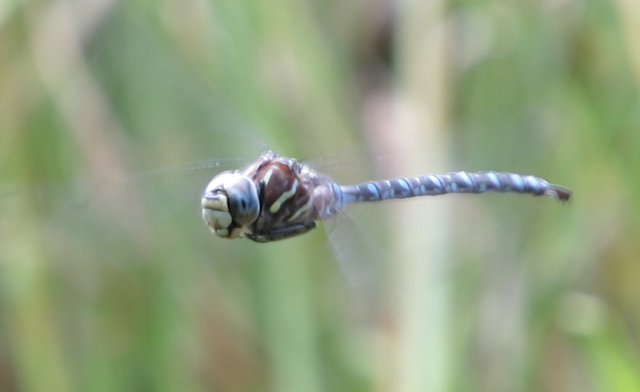 Next, we were looking at the ditches to see if there were any meadowhawks out and about. I said this was about the time we would expect to see Striped Meadowhawks—sure enough, a minute later we spotted one on his favorite perch in the ditch. Here he is: 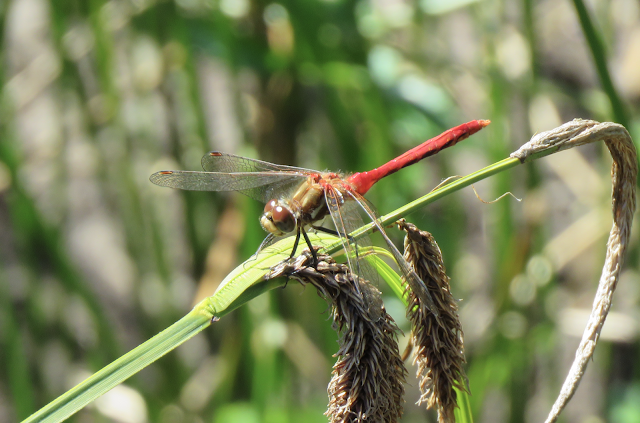 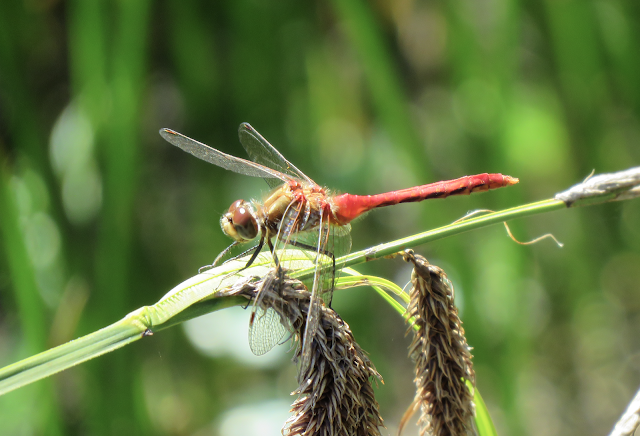 A few moments later, Betsy spotted a Spotted Spreadwing. This is a lovely, elegant damselfly, with wonderful blue eyes. 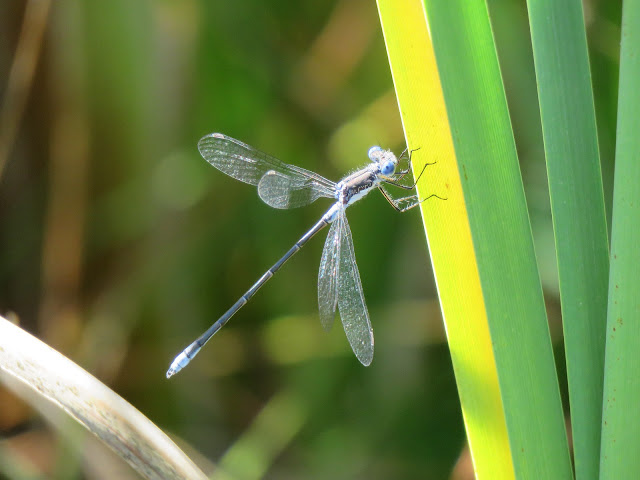 At this point, quite surprisingly, we had three new odes for the year. I said, wouldn't it be nice if we could get a fourth, but what would it be? Then I saw something red flashing around, interacting with a Paddle-tailed Darner. I wondered for a moment if it could be a Western Red Damsel.

Then I got a look at it when it perched—it was a meadowhawk. I checked it out with my binoculars, and was surprised to discover that it was a White-faced Meadowhawk—the first we had ever seen in Anacortes. It's a beautiful dragonfly, similar to the Striped Meadowhawk, but without stripes on the thorax, and with a chalk-white face. Here it is: 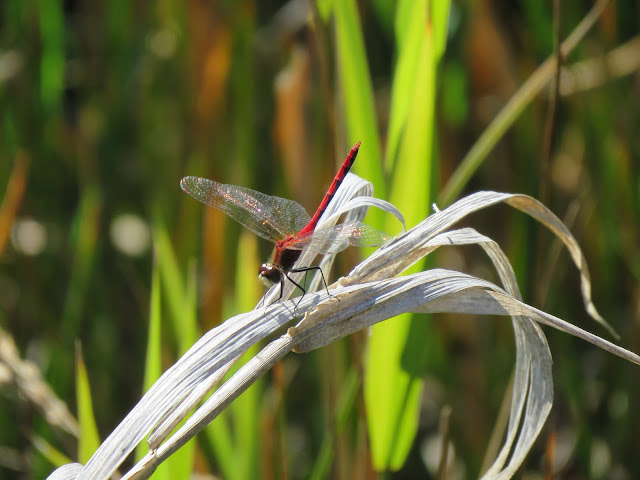 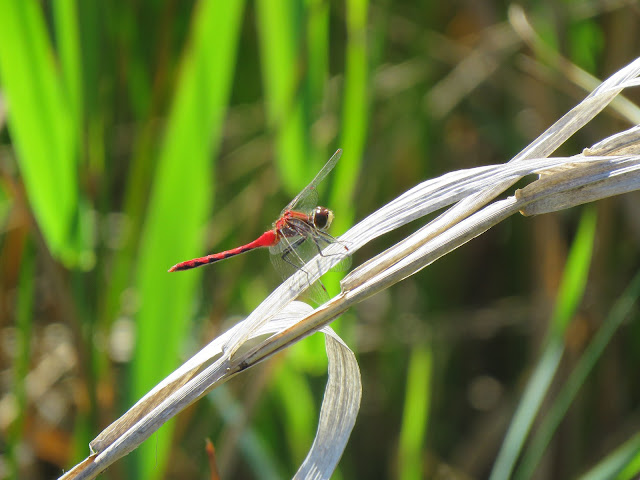 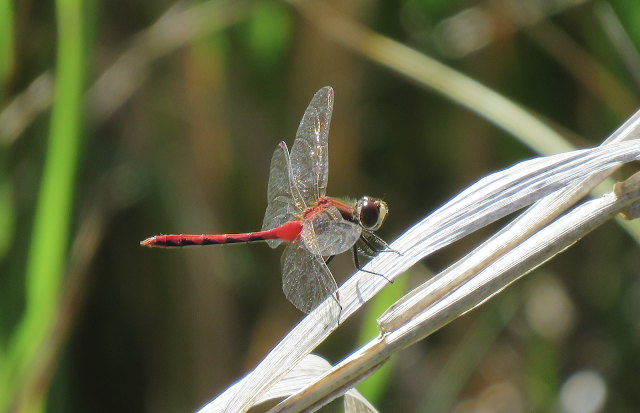 So, four new odes for the year, and a new ode for Anacortes. This is probably a good time to update the list of ode species seen in Anacortes. Here it is:

Not a bad list for our small little town.

Posted by  James Walker at 9:33 AM No comments:

Email ThisBlogThis!Share to TwitterShare to FacebookShare to Pinterest
Labels: Anacortes

First Of The Year: The Odonates Are Back!

We saw our first odonates of the year today at Little Cranberry Lake here in Anacortes. We had been looking for them for the last couple weeks, but today, quite suddenly, they were here in numbers.

Our first sighting was a female Pacific Forktail resting on a twig away from the shore, soaking up the sun: 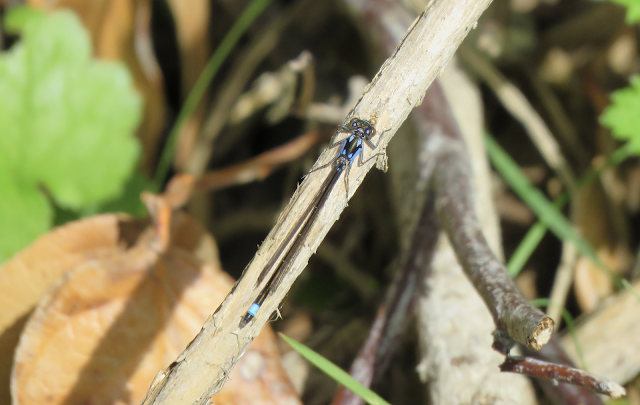 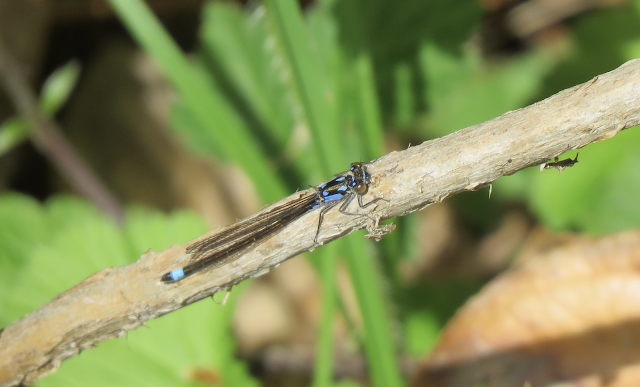 A few minutes later we found another one on a fern leaf not far away: 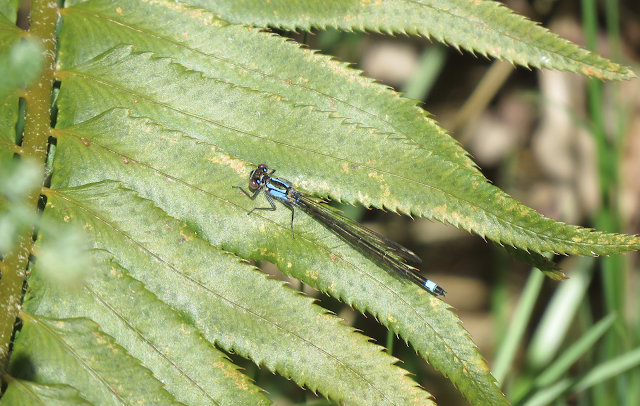 Notice that the female has only a single blue segment at the tip of the abdomen. In addition, she often has a stripe on top of the thorax rather than spots as in the male. The stripe may break off in the middle, however, as in the first individual.

A short time later we saw a male on a floating twig near the shore: 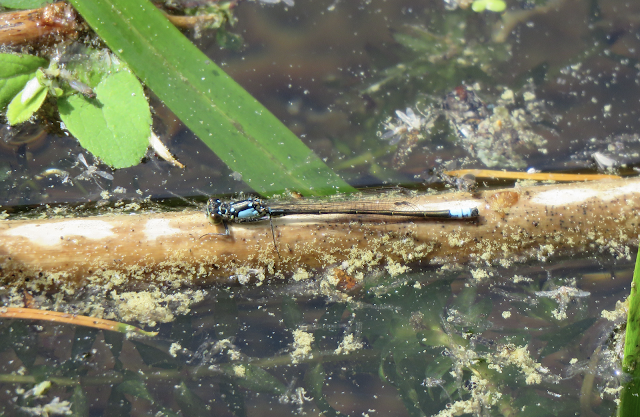 The male has nice distinct spots on top of the thorax, two blue segments at the tip of the abdomen, and hamules under segment 2 of the abdomen. He was at the water waiting for a female to mate with; the females were away from the shore where they can rest and feed.

We also saw a couple female California Darners flying back and forth along the shore, and occasionally perching on the ground—as is their want: 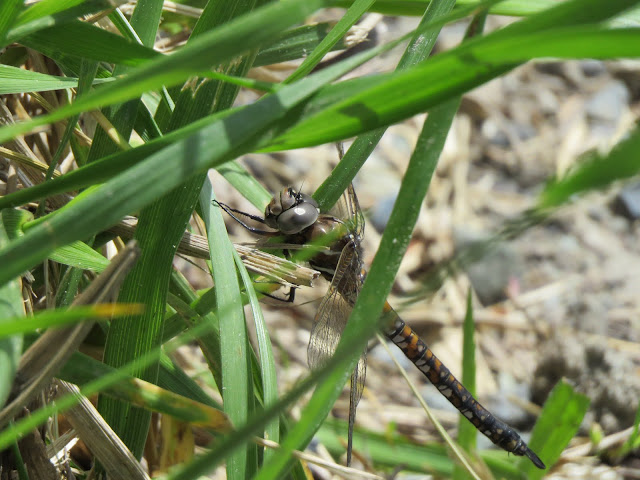 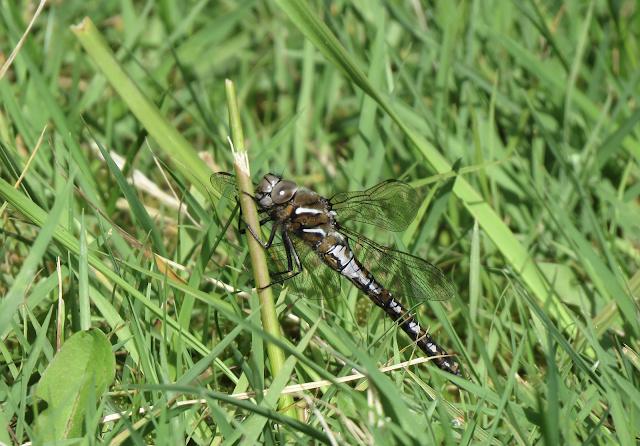 We'll keep checking from day to day now that we have a thriving population to investigate.
Posted by  James Walker at 3:19 PM No comments:

Well, it's here—2020—the start of a new year and a new decade. Here's wishing you and yours a healthy and fulfilling New Year. 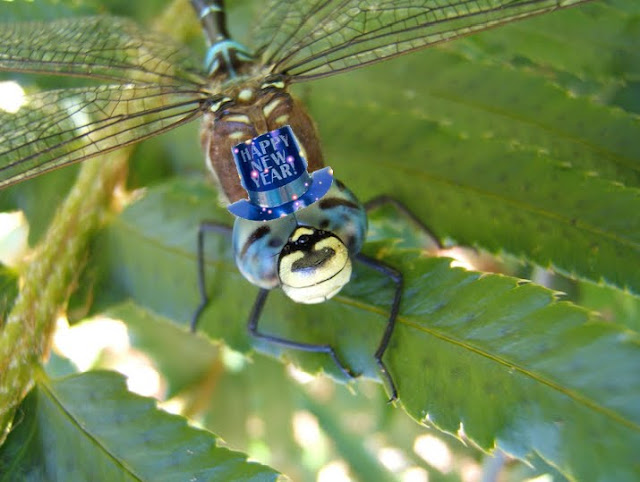 I hope 2020 provides you with many delightful (and happy) dragonfly experiences.
Posted by  James Walker at 11:53 AM No comments:

We keep setting new records for the latest flight date of the season. A new record for the Shadow Darner was set just a few days ago, and yesterday a new record for any kind of dragonfly in our area was set with the observation of an Autumn Meadowhawk on December 9, 2019.

The temperature was a fairly mild 42 ˚F, and it was nice and sunny, with just a slight breeze. We checked all the likely spots—the benches, the fence, the face of the dam—but came up empty. It seemed that the recent string of cloudy and rainy days had terminated the dragonfly season in Anacortes. But then I noticed some motion on the trunk of a tree far back from the shore. Looking carefully, I spotted a male (of course) Autumn Meadowhawk basking in the sun. Here's a photo of him: 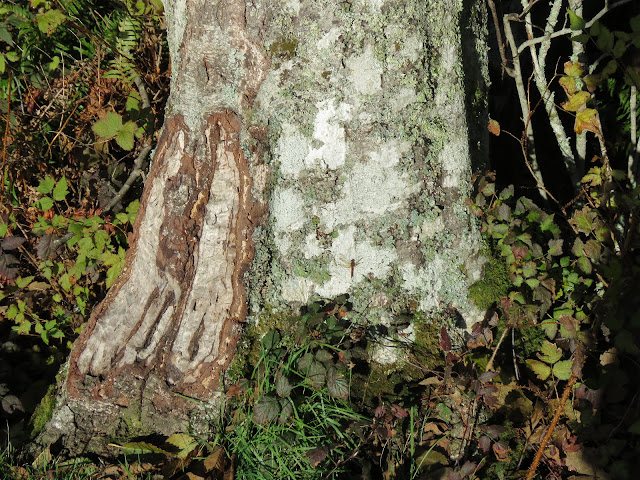 Getting a bit closer we can see him in detail: 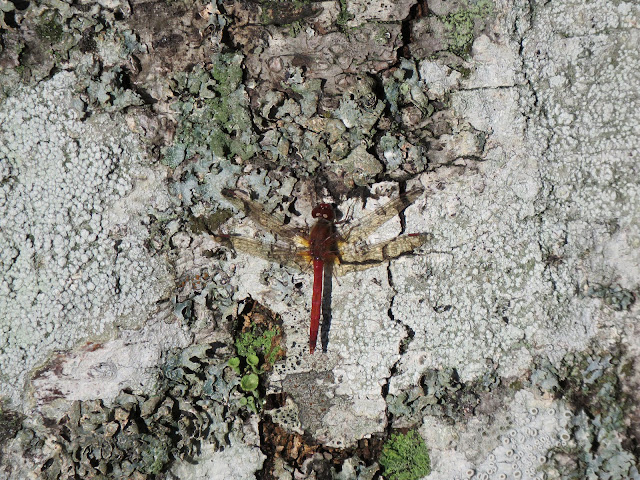 I say 'of course' when referring to the fact that we saw a male, because we haven't seen a female for several weeks. It really seems that at the end of the season the population becomes asymmetric, with males far outnumbering females. This applies not only to the Autumn Meadowhawk, but to the darners we see at Little Cranberry Lake as well.

We returned home and enjoyed a lovely sunset: 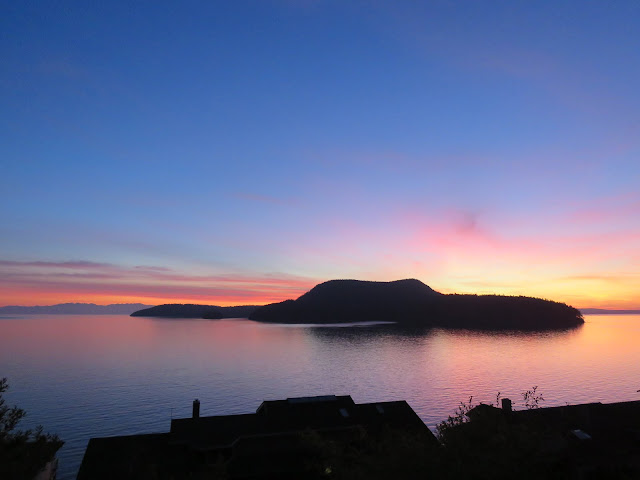 The sunset was all the more satisfying knowing one of our friendly dragonflies was still alive and well at Little Cranberry Lake.
Posted by  James Walker at 3:16 PM No comments: 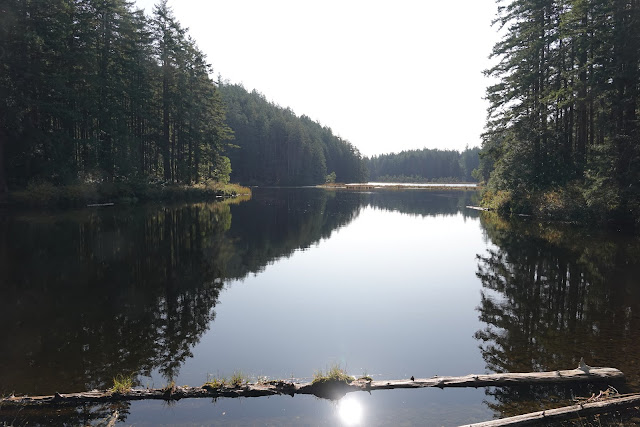 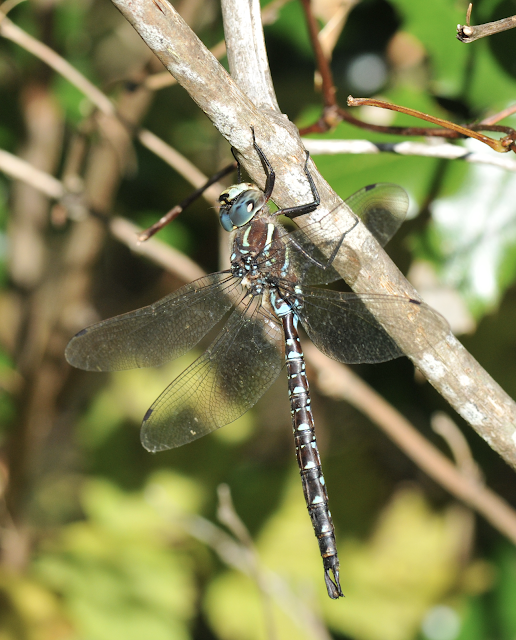 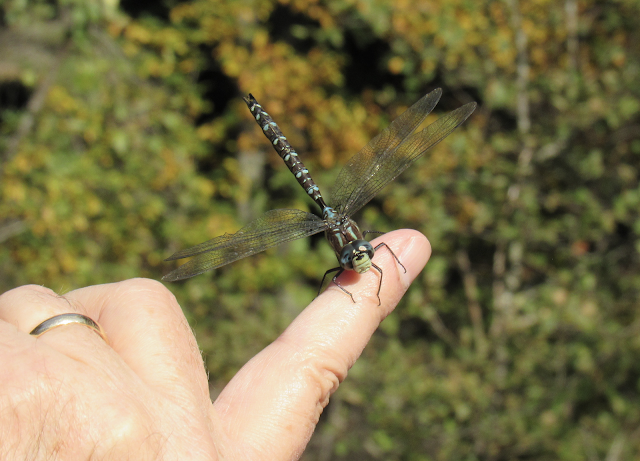 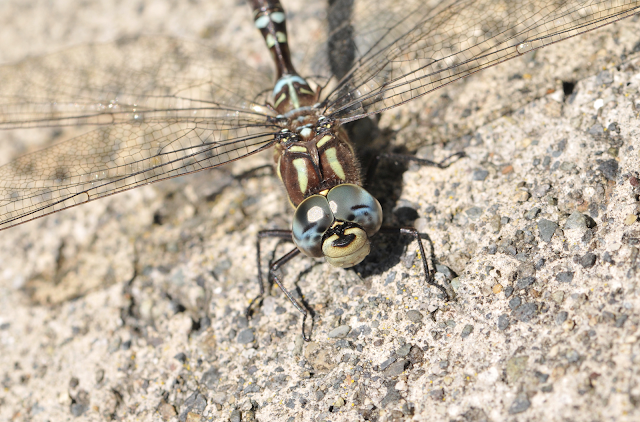 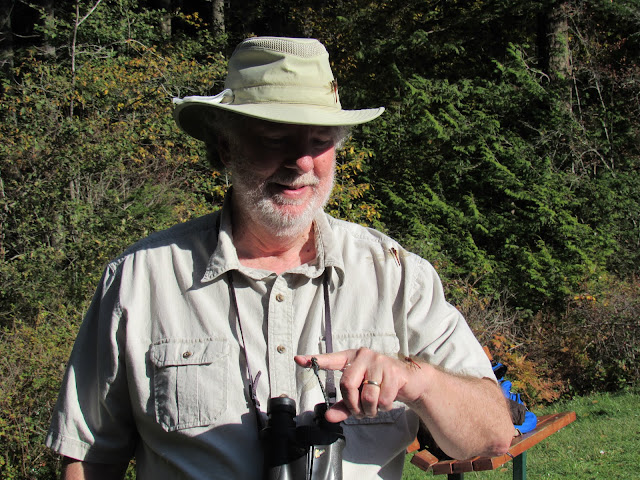 Everyone had a good time taking pictures of the dragonflies—it was a true "Dragonfly Whisperer" experience for the class!
Posted by  James Walker at 11:25 AM No comments:

Here's a look at an immature male Eight-spotted Skimmer at Heart Lake in Anacortes: 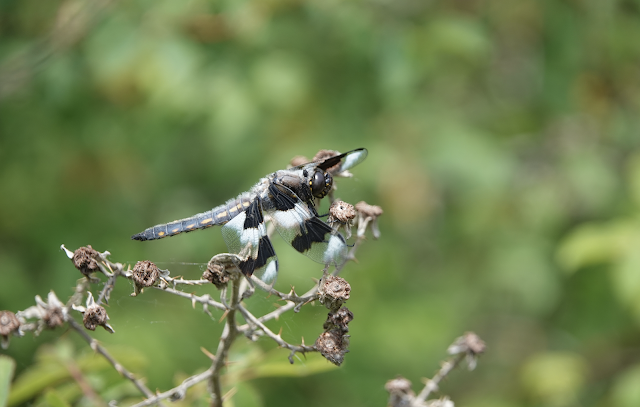 Notice that the abdomen isn't pruinose bluish-white, as it is in adult males. In fact, at this age the male looks like a female, except for the white patches in the wing which are not present in the female.

In addition, the front legs are tucked up behind the head. This is a common way for dragonflies to relax when they are perched, and is also common in flying dragonflies.

Eight-spotted Skimmers are featured in my field guide, Common Dragonflies and Damselflies of the Pacific Coast. Check out the spread devoted to these beautiful dragonflies:

You can find the field guide at the following link:

This species is abundant at Heart Lake, and common at Little Cranberry Lake, as well.
Posted by  James Walker at 11:30 AM No comments: